Detroiters in the 1940s preferred streetcars to buses 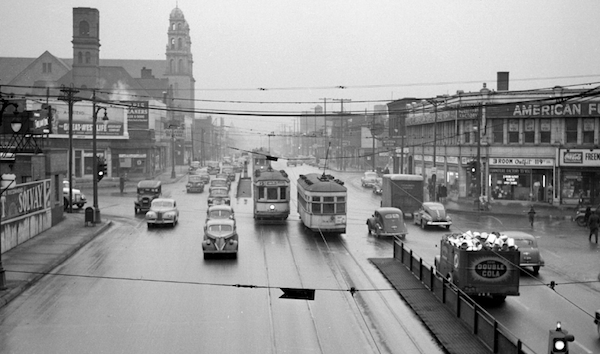 As Detroit gets prepared to see the first streetcars run on Woodward Avenue in 60 years, it's worth looking back to peer into the era that saw the city's Department of Street Railways (DSR) turn into the bus-only DDOT.

A key figure in that transformation would be Fred Nolan, head of the DSR back in the 1930s. Nolan was instrumental in turning Detroit's rail-based transit system into a bus-based system.

Right up front, it's important to point out that Detroit's transformation from rail to bus has almost nothing to do with the National City Lines case, in which a subsidiary funded by General Motors, Firestone Tire, Standard Oil of California and Phillips Petroleum bought up local transit systems throughout the United States and switched them to bus lines. Those companies were private; Detroit's system was public.

But Detroit's public system was headed by the bus-loving Nolan, whose enthusiasm for buses may look quaint today, as we're struggling to rebuild our rail-based transportation. But it's important to remember that buses were futuristic in the 1930s, and bitter fights over fares with the private streetcar companies were still a recent memory in Detroit, before they were bought by the city and publicly run.

Many transit historians seem to agree that the DSR's bus push made sense in the early to mid-1930s. Not everything needed to be a light rail line, and buses were likely well-suited to many of the low-density routes Nolan established in the increasingly suburban Detroit. Some bus lines extended the reach of rail lines, without the added cost of laying rails and safety zones.

Of course, buses wear out much more quickly than rail, and carry fewer passengers on a bumpier ride. But Nolan was a man on a mission. In an article from 80 years ago, Dec. 4 1936, we found Nolan happily talking up his buses, which saw an increase in ridership due to — adding more buses. In the next two years, Nolan's DSR would convert five lines — Myrtle, Van Dyke, West Jefferson, Depot, and East Lafayette — to bus lines.

According to Detroit transit historians, that was the year Nolan began his campaign "to convert the Detroit operation to all buses by 1953." (The end actually came three years later, slowed down by World War II, when the city needed high-capacity, reliable streetcars to transport hundreds of thousands of war workers, while rubber and gasoline were strictly rationed.)

Of course, this summer, we discovered a trove of letters at the Burton Historical Collection dating from the 1940s, written by average citizens to Detroit Mayor Edward J. Jeffries Jr. (It's the same trove in which we found letters from racist white Detroiters opposed to integration.) We were especially interested by a cache of letters from Detroiters worried about losing streetcar service, especially on the major Grand River line, and opposed to Nolan's tendency to switch streetcar lines to bus lines. Shortly after his swearing-in on Jan. 2, 1940, Jeffries was bombarded with letters.

One of the main complaints was that while Nolan was busy buying buses to replace streetcar lines, streetcar service was suffering. One rather witty correspondent writes DSR Commission President Samuel T. Gilbert (with a copy to Mayor Jeffries) on Jan. 24, 1940, that "… A study of all lines entering the downtown section of the city will show that they are now overloaded (shippers of live stock are not permitted by law to so load stock cars) as the public is very well aware. This is the greatest factor that creates private car driving. I believe the department must first place more service on these lines, build up public confidence which in turn will slowly increase the turnover back to the transportation lines."

Or take a look at this doozy, from the same day:

The objection of this letter writer wasn't so much that the system made use of buses, but that it was a system out of balance, which meant jammed streetcars forcing customers onto buses. (Of course, for Nolan such trends presented another opportunity to crow about "increasing bus ridership.")

Here's a standout letter: utterly non-confrontational, written by an elderly man who wanted the mayor to keep streetcars on Grand River. 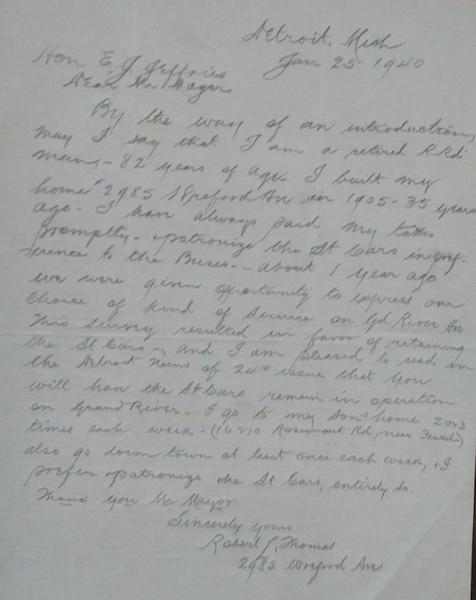 Other letters were more direct, as was this anonymous but friendly note:

Or look at this Sept. letter from "Wm. F. Andricks, 11042 Cloverlawn, Andricks Engineering & Manufacturing Co." He complain about the lack up upkeep on the streetcars, transfers from bus to bus, and his impending switch to driving his personal car.

It's worth noting that the Grand River streetcar line, the subject of so much controversy in several of these letters, was the first major city streetcar line to be converted to buses, on May 5, 1947, one of four such conversions in that year.

Another writer, Mrs. Mabel Baker of 18699 Buffalo St., seems to be at the end of her patience. She says bus accidents are bound to happen the way the vehicles are crammed.

These letters aren't the only testament to Detroiters' preferences for rail-based transit. In our story marking the 50th anniversary of the last streetcar to roll down Woodward Avenue in April 1956, we noted, "A newspaper poll showed that Detroiters, by a margin of 3-to-1, opposed the switch to buses."

We shared this trove of letters with a streetcar aficionado friend, and he saw something completely different in these letters. He said, "They tell the story of a very early pro-bus advocate [who] was years ahead of his time in advocating such a plan."

It's funny the way two different people can look at a set of documents and find them valuable for such different reasons. Because what we see in these letters is evidence of a stubborn streak in Detroit's ruling technocrats. It's almost as if the motto of Detroit leaders should be "the people be damned, we're going to press ahead with our plans, thank you very much."

Also, streetcars were the system the city was built around, its circulatory system, its way of moving people in and around the city in large numbers. The rail in the ground was proof that the systems would continue on that route — something transit experts today note can attract transit-oriented development. Take away a city's chief circulatory system and you can expect it to wither and suffer for lack of it.

But what if Detroit had done as Detroiters wanted and kept its beloved streetcars? If it causes you to wonder what else might have been, you're only human. Would disinvestment have fallen as far? Might those lines have been extended into the suburbs to unite the region with a rail system? Would downtown have remained the focal point it was when light rail lines converged there?

Who knows? One thing we can say is that the ghost of Fred A. Nolan lives on. In the recently defeated RTA proposal, we were asked not whether we'd like to have a rapid transit system of light rail vehicles running on dedicated rights of way. No, we were asked if we wanted a new system of buses.

Some things change. But some things just stay the same, don't they?