Despite the frigid temperatures and a wind that wouldn't allow candles to stay lit, what started as a gathering of 15  grew to about 30, with passerby joining.

Speakers included SOS representatives, TJ Rogers from the Freedom House in Detroit, and University of Michigan graduate Besher Kashlan, who read his poem "A letter to Humanity." 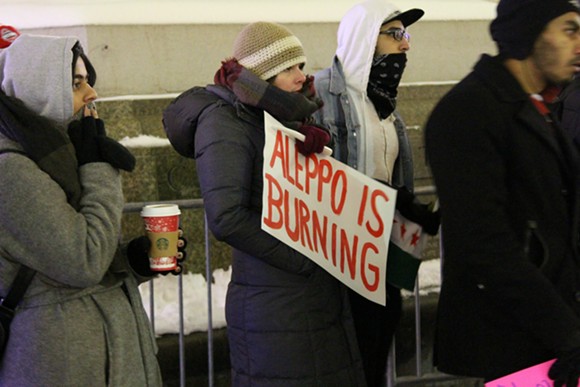 “The Syrian people need our support, but they also need our voice. We are privileged with the freedom and democracy that thousands of Syrians are literally dying for, and we can use that to help them,” she said. “We can call and email our elected officials and ask them to support legislation that would save Syrian lives. We can also urge our legislators to bring in more refugees and help resettle more Syrians.”

View a slideshow of photos from the event here.