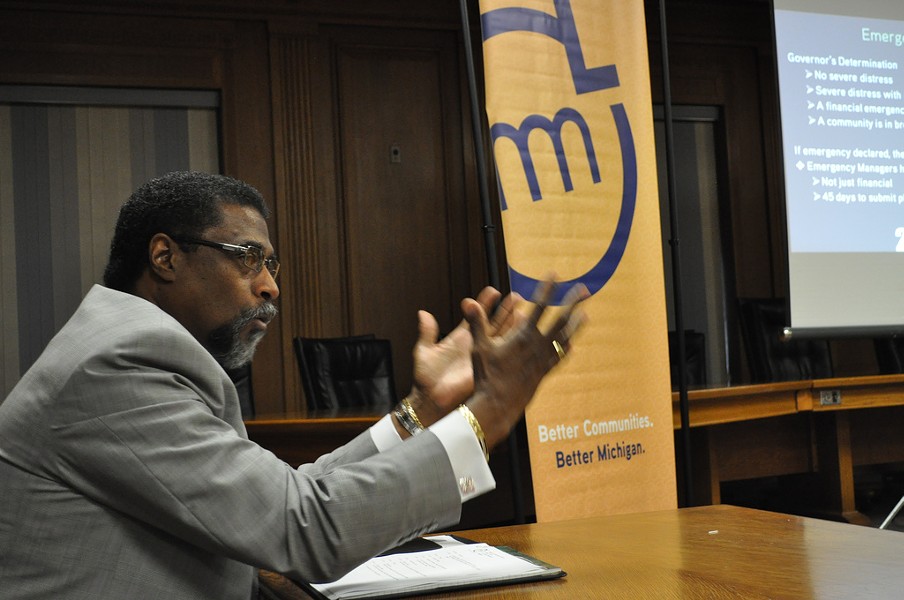 Although it wasn’t mentioned directly by name when state Attorney General Bill Schuette announced the filing of felony charges against four officials connected to the Flint water crisis, Michigan’s controversial emergency manager law was, for many, the target of the harshest indictment handed down Tuesday.

The law’s focus on fiscal austerity rather than human needs sits at the heart of the anxiety and outrage swirling around Public Act 436, which allows the state to appoint “emergency managers” to take over financially struggling school districts, cities and counties — effectively neutering local democracy in the process.

Even Schuette himself — who has ardently defended the constitutionality of the law in federal court — emphasized that, an excessive amount of importance placed on cost-cutting has been at the heart of Flint’s water crisis.

“There was a fixation on finances and balance sheets,” Schuette said during a morning press conference in which he announced that his office had filed criminal charges against two former emergency managers and two former Flint Public Works officials. “This fixation has cost lives. This fixation came at the cost of protecting health and safety. Numbers over people, money over health.”

Flint fell under the control of a series of emergency managers beginning in 2011. After the state takeover, officials decided to use Flint to help finance construction of the new Karegondi water pipeline from Lake Huron to Genesee County. As part of this move, emergency managers implemented the state’s fateful decision to use the Flint River as a temporary municipal water source that pipeline was being constructed.

It is all tied together.

As pointed out during the press conference, money from an $85-million loan allegedly obtained under false pretenses played a crucial role in financing the Karegondi pipeline.

Because of its financial dire straits, Flint was prohibited from borrowing any more money under most circumstances. To get around that obstacle, a scheme was concocted to use remediation of a lime sludge pond as the basis for an emergency loan. But most of the loan actually went toward helping to pay for the Karegondi pipeline. Buried in the fine print of that loan agreement is a stipulation mandating that Flint use the river as its water source while the pipeline was being built.

As Wayne State law professor Peter Hammer detailed in a 65-page report on the crisis released in July and the ACLU of Michigan reported on in a previous Democracy Watch blog, officials with the Karegondi Water Authority, Michigan Department of Treasury, Department of Environmental Quality and the emergency managers worked together to find and exploit a tenuous loophole that allowed them to "manipulate bond finance rules" and acquire the money for construction. At the same time, they committed Flint to use the river as an interim drinking water source while the pipeline was being built.

The switch resulted in the harsh river water leeching lead from the aging municipal pipes into the city’s water supply. The entire city, including thousands of children, was exposed to lead-poisoned water until the state switched back to the Detroit system earlier this year. Although required corrosion control is now being used, residents still cannot drink unfiltered water.

The false pretenses charges brought against former emergency managers Darnell Earley and Gerald Ambrose “are based on the Defendants gaining authorization to borrow millions using the alleged reason of an environmental calamity,” according to a statement issued by Schuette’s office.

“Without the funds from Flint,” the statement continued, “the Karegnondi Water Authority (KWA) Pipeline would have to be mothballed. However, as a bankrupt city, Flint needed the Michigan Department of Treasury’s approval to get loans.”

Earley and Ambrose face a maximum penalty of 20 years in prison if convicted of false pretenses for the loan scheme — which, Todd Flood, special Flint water crisis prosecutor appointed by Schuette, described as a “classic bait-and-switch.”

Along with Earley and Ambrose, former Flint public works officials Howard Croft and Daugherty Johnson were each charged with two felonies alleging that they helped obtain the loan under false pretenses. They are also accused of allowing the Flint water treatment plant to begin operation before it was ready to adequately treat the river water.

“Defendants Croft and Johnson allegedly pressured employees of the Flint Water Treatment Plant to get the plant in working order before April of 2014, the scheduled date for re-start,” said the Attorney General’s office in a written statement. “When the deadline closed in, rather than sound the alarm, the defendants allegedly ignored warnings and test results and shut off the pipes pulling clean water from Detroit, and turned on the Flint River valves.”

In August 2015, the ACLU of Michigan confronted Croft about the decision to use river water without applying mandatory corrosion controls — something the water treatment plant didn’t have the equipment needed to do. Croft, at the time, placed blame for the decision to forego corrosion control treatment on the state Department of Environmental Quality. You can see him making that assertion, as well is placing responsibility for the decision to use the river with Governor Rick Snyder’s office, in the ACLU of Michigan’s short documentary, “Thirst for Truth.”

Former emergency managers Earley and Ambrose were featured in another short documentary, “Hard to Swallow.” In that piece, Earley is seen touting the financial benefit of Flint joining the Karegondi pipeline project.

And Ambrose, in a March 2015 meeting with Flint residents, embodies what Schuette characterized as Flint being “a casualty of arrogance, disdain and a failure of management.”

Reactions to the charges were strong.

Kary Moss, ACLU of Michigan Executive Director, called for reform of PA 436, the measure that gives emergency managers sweeping powers over the municipalities they head: “Darnell Earley and Jerry Ambrose may be the ones facing charges, but it is really Michigan’s misguided emergency manager law that has been indicted here … We welcome the recent actions by the Attorney General, but we urge the state to reform this law so that nothing like this can ever happen again.”

In the wake of Flint’s water crisis a handful of bills seeking to reform PA 436 were introduced, but zero hearings have been held.

Following the announcement of charges being brought Tuesday U.S. Congressman Dan Kildee (D-Flint) issued a statement directly tying the Flint water crisis to the state’s emergency manager law: “Justice for Flint families is important and I support ongoing investigations, led by the facts, which seek to hold those who caused this crisis responsible. Today’s criminal charges, including against two of Governor Snyder’s state-appointed emergency managers, is an indictment not only of their decisions, but an indictment against the administration’s failed emergency manager law that contributed to this crisis.”

To that point, Schuette promised during his press conference that the investigation into those responsible for the Flint water crisis is ongoing. How much further — or higher — the investigation goes still remains to be seen.

Curt Guyette is an investigative reporter for the ACLU of Michigan. His Democracy Watch blog can be found here.