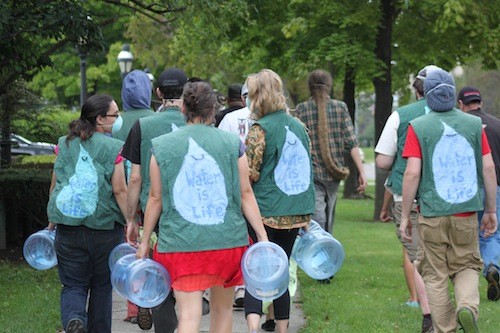 As we pointed out last month, Nestlé has withdrawn billions of gallons of Michigan water from well fields it owns in Osceola and Mecosta counties. For granting the international food giant this privilege, the state of Michigan has received perhaps a few thousand dollars in application fees.

Now the Michigan Department of Environmental Quality is poised to grant Nestlé permission to pump an additional 150 gallons per minute from its PW 101 well north in Osceola County. In order to pump more than 200 million gallons a year from that well, the company would pay Michigan the princely sum of $200.

How quietly was this deal going down? One of the key groups opposing this giveaway is Michigan Citizens for Water Conservation, who have offered ample examples of the damage Nestlé's pumping has already done. They were shocked to learn at the end of October that the public comment period on the deal was scheduled to end in just four days.

Since MCWC has publicized the proposed permit, the period for public comment has been extended until March 3, 2017, and to date more than 13,000 comments have poured in from Michigan residents. Those tasked with reading them haven't found a positive one yet.

And MDEQ has to hold at least one hearing, which organizers say would probably take place in February in Big Rapids.

But here's where things get really interesting.

MCWC is taking a broad view of Michigan's water resources. Given water shutoffs in Detroit and the poisoning of Flint's city water, the choice to let an international corporation pump tens of millions of extra gallons of water for $200 seems all the more indefensible.

In a statement released Friday, the group declared, "MCWC believes there is a serious disconnect in the State of Michigan’s water policy that potentially grants Nestle a permit ... [while] permitting thousands of people in Detroit to have their household water disconnected for non-payment for a few thousands of gallons of water and the residents of Flint be subjected to long-term contamination of their drinking water through senseless and even possibly criminal governmental acts."

That's why the conservation group is pushing for more than one hearing. In fact, they'd like hearings held all over the state.

MCWC is requesting several hearings on the Nestlé Permit increases, as we do not believe that this increase is only a local issue. We are requesting from the DEQ hearings in Detroit, Flint, Muskegon, Evart, and Traverse City at a minimum. We would welcome additional hearings beyond these but are specifically seeking these.

You can imagine the sort of passionate testimony such hearings would get from residents of Detroit, where water shutoffs have cost the city an estimated $12.7 million per year, not to mention Flint, where they pay the highest rates for water in the entire United States — for water that is essentially undrinkable.

WC has also issued a call for the feds to step in, specifically for the U.S. Fish and Wildlife Service to conduct a species inventory on Evart's Twin and Chippewa Creeks creeks, and for the United States Geological Survey to perform the future monitoring and data collection of the Nestlé's water takings under the DEQ. (See our original story for an idea of how far off some of Nestlé's flow rate estimations can be.)

The group is also requesting "a return to the original permit limits of 150 gallons a minute at the White Pine Springs well 101, until such time as the ground water table and the upper reaches of the Chippewa Creek have been restored, and contain fresh spring water."

They want "real time electronic monitoring" and switches that automatically shut off well PW 101 when the groundwater levels drop below a certain, agreed-upon point, and would like to establish terms for gradual 50-GPM increases to determine increased pumping levels that will not harm the environment.

Want to get involved and let Michigan's Department of Environmental Quality know that you'd like a hearing scheduled near you? You can leave a phone message for Carrie Monosmith at 517-290-2601 or email deq-eh@michigan.gov.