Is this Detroit McDonald's holdup the chillest robbery ever? 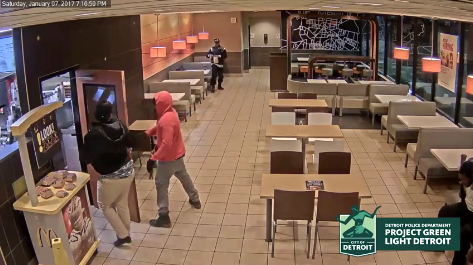 Far be it from us to speak in defense of crime. We condemn all who victimize others, from the low-down chiseler to the white-collar grafter. It's important to put that right up front, lest this blog post be misunderstood.

Because, reviewing footage of a robbery that took place on the evening of Jan. 7, at a McDonald's Restaurant at 9815 Grand River Ave., we've got to say, some criminals are more orderly than others.

Watch this 1-minute clip. It's from "Project Green Light," an innovative program that's only a year old. It involves the cameras set up at local businesses to stream live video into the Detroit Police Department. What you'll see is a robbery that is so calm, so orderly, that it was all over before the police could get there.


The video has already gotten 150 comments, at least a few of them about how the gunman doesn't seem all that rushed. The police department's Facebook moderator pointed out the crime took only 3 minutes to commit, and that police were on the scene in 6 minutes. The gunman made off with $400 — and what looks like plenty of food.

Now, not to minimize the shock and fear involved in being forced into the back of a restaurant at gunpoint, but if we had to take our pick between this suspect and some pop-eyed, sweating, screaming guy blasting his pistol in the air, we'd take the chill robber every time. Check it out, dude doesn't hardly even run: He just fast walks around the place, and breaks into a little lope at the end.

All that said, he still broke the law. Which means if you have any information on him, you should call DPD at 313-596-5240. They have a special chill-out room reserved just for him.