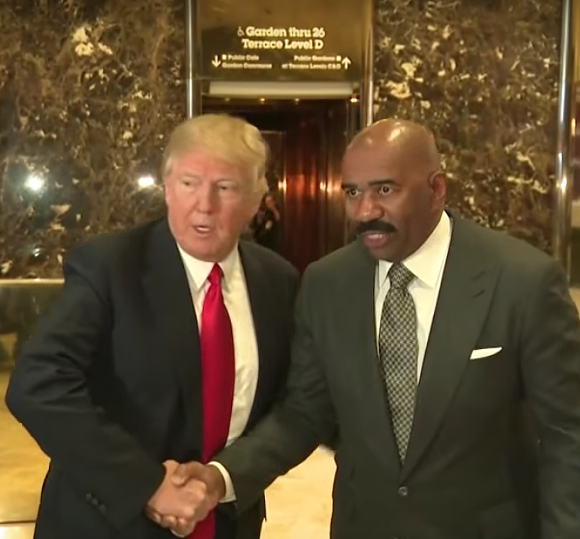 On Friday, a couple of days after the U.S. Senate held hearings on whether to let accused racist Alabama Sen. Jeff Sessions head the Justice Department, Steve Harvey found himself facing the cameras in the lobby of Trump Tower to explain what the hell he was doing there.

Apparently, the former Hillary Clinton and Barack Obama supporter's visit with President-elect Donald Trump had something to do with Detroit.

“We’re gonna team up and see if we can bring about some positive change in the inner cities,” said the radio show and Family Fued host on the heels of a meeting in which he says he was introduced to likely Housing and Urban Development Secretary Ben Carson. “One they wanna start with as a target is Detroit. Ben Carson expressed that because, quite naturally, he’s from Detroit.”


Carson grew up in the city (though not in public or subsidized housing) and has said he feels he can make a “significant contribution” as HUD secretary “by strengthening communities that are most in need.”

By the same token, Carson has called fair housing communist and, as a former neurosurgeon with no significant management experience, seemingly lacks any clear qualifications to run the $50-billion agency tasked with overseeing public housing and rental assistance programs.

But Harvey says Carson and Trump appear sincerely committed to improving the quality of life for those in the country's poorest pockets. And he says he's willing to use his role as host of the morning radio show most popular among African-Americans to help move things along.

“[We’re] gonna get some things started. They have a plan for the inner cities, but they need help."

However, as is the case with many of Trump's proposals, no details have been given on what that plan may entail.