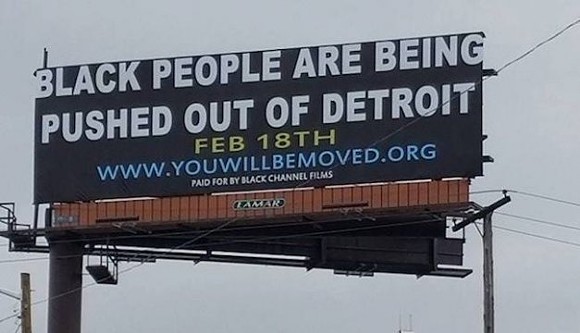 If you've drove near Eight Mile Road and the Lodge Freeway recently, you may have noticed a new billboard with a very simple message: "Black people are being pushed out of Detroit."

BLAC first reported about the new billboard and pointed out that Detroit is still 80 percent black, but downtown seems to be a hotspot for gentrification discussion.

The billboard is actually an ad for a new indie film by Jason Black. Gentrified — Ethnic Cleansing: American Style takes a look at the gentrification of major US cities, including Detroit, and how it effects black communities.
We've seen a lot of billboards pop up recently that are trying to get a message out that some people may not want to see. Last month, a defaced east side billboard got a lot of people talking, and before the election an anti-Trump billboard in Arabic appeared.

BLAC also points out that there are screenings of the film around the world, including Detroit. A screening will take place February 18 at Shrine of the Black Madonna. The show starts at 6 p.m. and you can get tickets here.