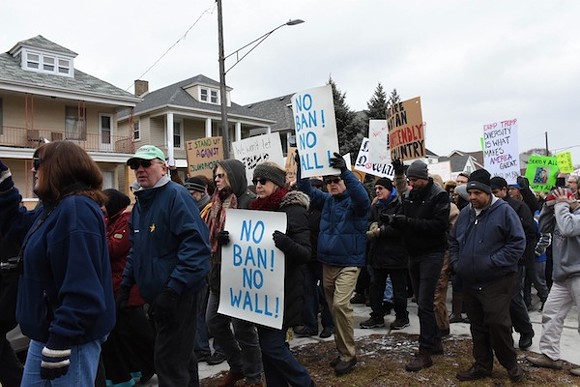 It was a nice day for a demonstration yesterday. Though skies were cloudy and it was chilly, a few hundred people gathered outside Hamtramck City Hall to listen to speeches opposing President Trump’s travel ban. It wasn’t the biggest protest in the country, but a notable one because, although Hamtramck is the most ethnically diverse city in Michigan, it has a large Muslim population and the country’s only majority-Muslim city council.

Probably the best part of the protest was marveling at all the creative signs people made. It disproved an unfair caricature of left-wing protests that people are holding signs that are negative while changing, “No! No! No!” Instead, the signs ranged all over the place: funny, sardonic, witty, sassy, vulgar, absurd … one of my favorites was a toddler whose understanding of “protest” got as far as knowing a sign must have some writing on it. This happy young child kept dancing around with a sign covered with jubilant scrawling.

And that was right in the spirit of most of the gathering in Winfield Park. Aside from a few tough-sounding chants started up by speechmakers, it was a pretty gentle affair, with friendly smiles and a pretty darn multicultural crowd.

We were also impressed that there were no “free speech” pens or lines of police. The police stayed mostly inside the police station, which made sense because there was no disorder to speak of. Since the basic idea of the demonstration was that we can all get along, it was hardly a surprise if peace broke out. And it did.

Yet we have a few suggestions. Protest organizers should tell people to speak more loudly into the microphone, and they should raise those amplifiers up higher where they can really reach the crowd. If you were 50 feet back at ground level, you really couldn’t hear what speakers had to say.

We hope some of them pointed out that right-wingers often claim that they are only opposed to illegal immigration: Well, if they back the travel ban, it would seem to put the lie to that. These green card-holders have done everything by the book, haven’t they? If you approve of legal immigration and still cheer on this travel ban, then it really wasn’t about legal vs. illegal immigration to begin with, was it? It was about socking it to people you irrationally fear and loathe. 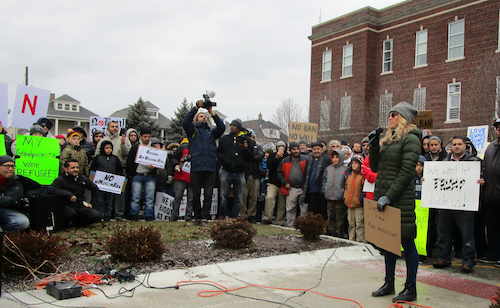 Another thing we didn’t hear (although it doesn’t mean it wasn’t said): arguments against Trump’s immigration bans tied to what used to be called “The Global War on Terror.”

You will recall that President Trump’s executive order banned people from Iraq, Iran, Syria, Yemen, Sudan, Libya, and Somalia. Now, what do these countries have in common?

Iraq has been in a shambles since the United States wrecked it in a 2003 invasion. Libya has been a basket case since NATO bombs rained down on it and its leader was assassinated. Somalia is a country where the secretive U.S. drone program has been ramping up strikes in recent years. In Yemen, a lopsided civil war is raging, with the Saudi Arabians involved, supplied with U.S arms. In Syria, the United States has been funding insurgents allied with Al-Qaeda, all while rattling its saber at Iran. The odd country out here would seem to be Sudan, whose neighbors in South Sudan have had problems enough of their own without Uncle Sam’s help.

If any speakers at the protest made the link between these people fleeing their countries and the United States behaving like a bull in a china shop in the Middle East — killing 1.3 million people and displacing many millions more — we couldn’t hear it.

And if we’re right, that’s a shame, because there’s a vital point there worth making: The people fleeing these countries in the Middle East aren’t terrorists — because they’re the victims of terrorism. It’s something we’ve pointed out before: People fleeing sectarianism and terror come here because they’re eager to embrace America's secular culture and ballot-oriented politics. It’s not exactly sporting to turn people’s countries upside down and then refuse them sanctuary based on suspicions they’d do us harm.

As Kamal Rahman of the Bangladeshi-American Public Affairs Committee pointed out to us, "Those who experience conflict, those who experience suffering, they tend to not to want to repeat it. The Muslims that are coming here, most of them have suffered through war, through terrorism, through everything. They know what to avoid. It's highly unlikely that someone would like to be in the same situation as they were before."

Still, it’s early days yet for these demonstrators, who are only beginning to come together in the wake of Trump’s executive actions. You can expect the crowds of placard-presenting protesters to now begin educating one another, creating their own counterculture that will oppose the rightward lurch that’s been well-established for more than a generation now. The group fighting for minority rights will only grow more powerful. 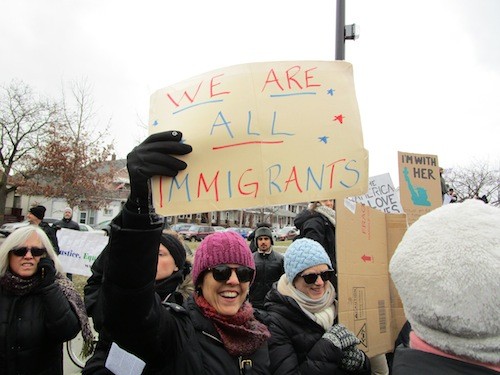 And yet, yesterday, it seemed that the smallest things offered the most hope. A Middle Eastern man watching the protest from down the street with a smile. Chilly marchers warming up with hot food at the ethnic eateries in town. Or one simple sign pinned to a local woman’s back: I [HEART] my Muslim neighbors.

That's where so much good stuff begins: with feelings of fellowship, love, and gratitude for one another. Fear may dominate the political landscape, but it clearly doesn’t have a home in Hamtramck.