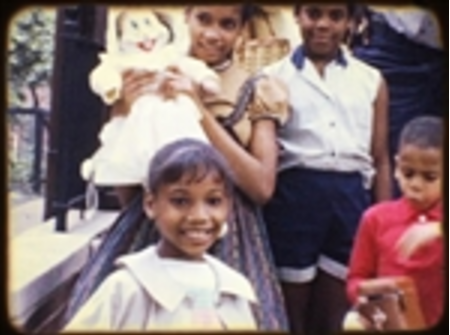 Home movies depicting crumbling buildings in the aftermath of the 1967 riots were among more than half a dozen on display at the Detroit Institute of Arts theater Thursday, as the museum kicked off a series of screenings that will run through the 50-year anniversary of the riots in late July.

The movies, shot between 1960 and 1969, depict life in a more segregated time, when the majority of city residents were white. White people are shown milling about the airport, cooling off in a Detroit public swimming pool and playing street wiffle ball alongside rows of small brick homes with manicured lawns. Black people are seen posing for wedding photos in a cramped living room, putting on a swimwear fashion show and skipping through the long-gone Boblo Island Amusement Park. The audience only once glimpsed whites and blacks intermingling, as the children of Henry Ford workers crab-walked and potato-sack-raced at the automaker's annual picnic.

"Back then there wasn't a lot of diversity," Lawrence Bohner said into a microphone as a film reel rolled silent footage of him splashing around a pool in 1960. "My wife and I, when we married ten years later, we wanted to make sure we lived in an area that was integrated."

Of course, the 75-minutes of footage offered more than just a window into the racial climate of the time; it gave viewers a chance to observe that 1960s aesthetic now relegated to tv shows and vintage stores. Cars were curvy and gleaming; women wore one-piece bathing suits that extended to their thighs; and Detroit's homes, buildings, sidewalks and parks were well-maintained.

That theme began to shift, however, after July of 1967.
"It was pretty incredible," contributor Michael Papin said as a projection of toppled bricks along Rosa Parks Blvd. in August of that year appeared. "Me as a 12-year-old watching this. It was just kind of surreal driving down part of Detroit and seeing these buildings."

Nearly 1,400 buildings were burned over the course of four-days of rioting. Forty-three people were killed and more than 300 were injured. Though the disturbance began when a raid on an unlicensed after-hours bar turned violent, the uprising was fueled by more than that. Reports of police brutality and underlying conditions including segregated housing and schools also played a role.

The DIA will hold 16 more riot-era home video screenings through July 29, the week of the 50th anniversary of the riots. More information is available on the DIA website.