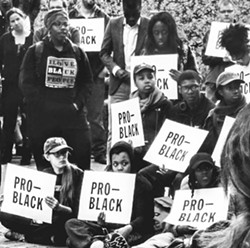 Eastern Michigan University has dropped all punishments issued against 16 students who were involved in anti-racism protests, according to a statement released today.

The students were protesting the university's perceived indifference to racist graffiti that appeared on campus late last year, and held several peaceful demonstrations which included disrupting an EMU football game and an after-hours sit-in in the Student Union. Following the sit-in, students were issued reprimands which included deferred suspensions and the threat of expulsion for criminal trespassing.

"I have stated on several occasions that it was not the proper role of any administrator to intervene in an ongoing conduct process," EMU President James Smith says in a statement. "Now that the judicial process is complete, it is time for the campus community to move forward. The unique and compelling circumstances associated with this situation warrant this action."

According to the statement, Smith says he has appointed a Presidential Commission on Diversity and Inclusion and that EMU is working on implementing items from a Black Student 10-Point Plan. The plan calls for a faculty that matches the ratio of the demographics of its students excluding the Africology department, a required general education course on race for all students, black studies as part of every major, evaluation of all staff, a low-income meal plan option, and scholarships for black students, among other demands.

Additionally, the school says it has committed more than 610 hours into finding the vandals, has executed seven search warrants, and have interviewed 40 people, according to MLive.

Students issued a joint statement encouraging the efforts. "We understand that the conduct process needed to be completed, and we applaud President Smith’s decision to drop the charges so that we as a student body can continue to move forward in our fight to end institutionalized racism," Student Government President Tanasia Morton, EMU NAACP President Darius Anthony, and EMU Black Student Union President Jaren Johnson wrote in a joint statement. "We look forward to uniting and working closely with him and other administrators and student leaders in a constructive manner on the many initiatives underway to enhance Eastern's inclusiveness. There is much work to do, and we are eager to get to work as allies. We urge other students to join us in this commitment."

Read Smith's entire statement is below:

In consultation with the Provost and administrative leadership, I have directed the immediate dismissal of sanctions imposed against students involved in the after-hours protest in the Student Center on November 2, 2016.

I have stated on several occasions that it was not the proper role of any administrator to intervene in an ongoing conduct process. Now that the judicial process is complete, it is time for the campus community to move forward. The unique and compelling circumstances associated with this situation warrant this action.

I am grateful to the students and others who spoke out on the matters surrounding these events. I recognize that these have been trying and challenging times for many of them.

We have much to look forward to on Eastern’s campus surrounding our diversity initiatives. We are making significant progress on the Black Student 10-Point Plan, and we have appointed a Presidential Commission on Diversity and Inclusion that includes an esteemed group of scholars, students and administrators.

We vow to continue to investigate and hopefully arrest the person(s) involved in the racist vandalism that took place on our campus early this fall. This remains a top priority.

It is important for all of us to remember that someone attacked our institution with messages of hate, likely because Eastern has embraced diversity and inclusiveness as a cornerstone value. The University administration joins with our students, faculty, staff and alumni in condemning the racist vandalism.

It remains the policy of the University to have a set of community standards as detailed in the Student Code of Conduct. Uniform application of the standards benefits the entire community. Eastern’s response to the actions of the students on the night of November 2 was consistent with those standards. It was accomplished with the utmost integrity and I am grateful to our Student Affairs’ administrators and our Public Safety officers for their demonstrated professionalism. But it is time to move forward now and give our full attention to constructively addressing the opportunities we face.

I also would like to reiterate that Eastern Michigan University has always and will continue to support the rights of our students to peacefully demonstrate, within the guidelines as detailed in the Student Code of Conduct.

I look forward to working with our entire community in the weeks and months ahead as we continue to build a campus environment that embodies our values of respect, equality and inclusion.