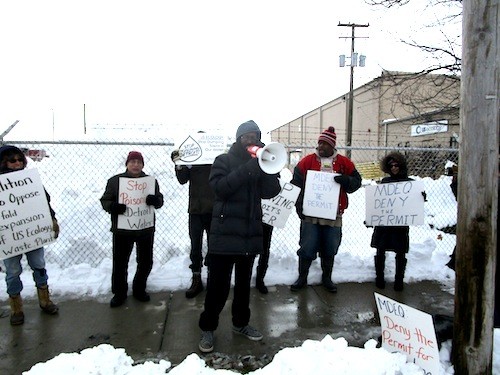 Michigan environmental activists are cautiously encouraged by a package of bills introduced by Democratic state lawmakers last week. The bills would ensure the Michigan Department of Environmental Quality had citizen oversight commissions, which were abolished by Gov. John Engler in 1991.

The proposed oversight comes at a time when Michigan's DEQ is under intense scrutiny by activists and environmental groups. Pending decisions that are being closely watched range from the proposed tenfold expansion of U.S. Ecology's toxic waste storage and treatment site in Detroit to Nestlé Waters North America's plan to pump 210 million gallons of water from aquifers in Osceola Township.

Speaking of MDEQ, Peggy Case of Michigan Citizens for Water Conservation told us, "They never deny a permit. That's the job of the DEQ is to permit. The money that they function off of comes from permits."

Case believes many of the problems with the department date back to when it was separated out from the state's Department of Natural Resources by Gov. Engler in 1995. The agencies were merged under Gov. Jennifer Granholm, but they were split up again in 2011 by Gov. Rick Snyder's first executive order. According to the department's guidelines as posted on a state government web page, part of MDEQ's mission is to be "partners in economic development."

The bills would offer citizens commissions a chance to weigh in on matters affecting clean air, drinkable water, and oil and gas pipelines, matters which should resonate all over the state given the air pollution in state Rep. Chang's home district, the emergency manager-driven Flint Water crisis in state Sen. Ananich and state Rep. Neely's home districts, and growing opposition to the proposed ET Rover and Nexus gas pipelines affecting Washtenaw and Livingston counties, among other places.

In a democracy, one would think that more public hearings would be a good thing. And given the seemingly sneaky way MDEQ invited public comment on Nestlé's plans to expand pumping — by publishing it in an obscure departmental calendar almost nobody reads — it makes sense to empower outside commissions that can ensure the people know when they have a right to comment, and that they have a panel that will hear them out.

While many of the state's environmental groups still seek more fundamental changes in laws on, say, shipping water out of the state for profit or being able to expand toxic waste facilities, the environmental activists we spoke with greeted the package of bills with some enthusiasm — and a bit of hard-earned skepticism.

Initial reactions from Michigan Citizens for Water Conservation ranged from "It's better than what we have" to "it sure is a [good] start." Of particular concern was the provision that "the citizen oversight boards would each have 11 members appointed by the governor with the advice and consent of the state Senate."

Speaking for herself, as a person with years of experience watching and fighting MDEQ's decisions, Peggy Case points out the shortcomings of governor-appointed commissions, that it's "easy to stack the deck in favor of polluters, depending on which lobbyists the Governor is listening to at the time." Case is also concerned that the governor could "cherry-pick the 'environmental' groups that are asked to participate," in order to "accommodate and provide the green legitimacy without really challenging the practices of polluters."

Again, speaking for herself, she says, "I would certainly welcome steps in the direction of citizen oversight if it is really honest oversight and not just 'greenwashing.'"