'A Day Without Immigrants' shuts down much of southwest Detroit 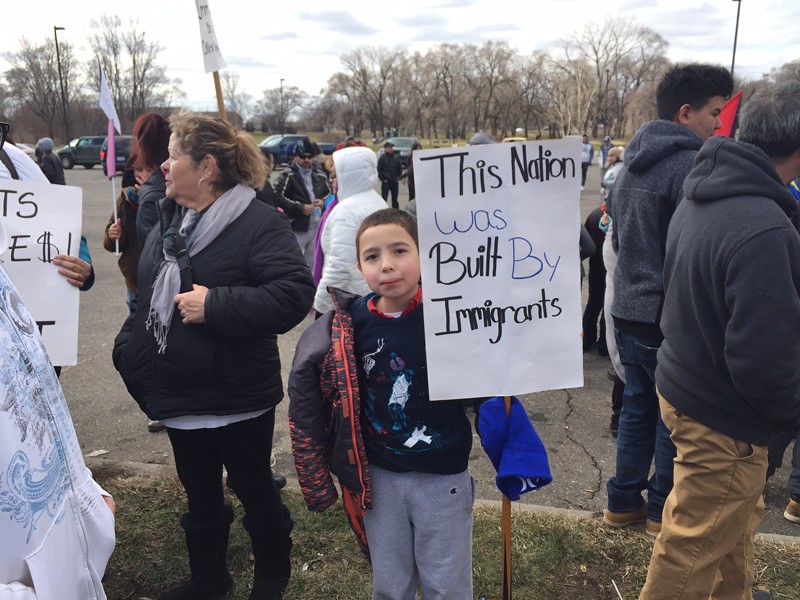 Hundreds of people marched past rows of shuttered businesses in southwest Detroit Thursday as part of a nationwide strike meant to highlight the contribution of immigrants amid an apparent ramp up in immigration enforcement activity under President Donal Trump.

Dozens of businesses in the majority Latino community had their lights off and rolling gates down for "A Day Without Immigrants." Protesters chanting "si, se puede"— Spanish for "yes, it is possible"— marched three miles from Clark Park to the General George S. Patton Memorial Center.

"We saw businesses closing as we went by because they saw [the march] getting bigger," said 22-year-old Detroit resident Jasmine Aguilar, a Mexican flag wrapped around her shoulders. "We just started seeing people come out from different places, leave their cars and join us. It shows we're united."

Chante Brown, a 30-year-old who also lives in Detroit, says the city's immigrant community has sent a powerful message.

But while the mood in southwest Detroit felt almost celebratory, the circumstances surrounding the event were extremely worrisome for those gathered. Trump's immigration agenda includes plans for a wall along the U.S.-Mexico border and a ban on travel from seven majority-Muslim countries. Protesters fear that an Obama-era policy protecting undocumented people who came to the country at an early age is also in jeopardy; last week, Immigration and Customs Enforcement agents arrested a 23-year-old who had twice qualified for the Deferred Action For Childhood Arrivals program. The DACA arrest came in the midst of a series of nationwide raids that rounded up more than 600 immigrants.

"They're not targeting the right people," Cuban-born Detroit resident Carlos Ponce said of the Trump administration. "We just want to work. We have done a lot of things for this country ... we have done a very good job for this neighborhood. Look at how many businesses we've got in Southwest, how we treat people."

Ponce works at a tortilla chip factory in the neighborhood and had the day off because of the protest. The Free Press reports that a total of about 100 businesses closed throughout southeastern Michigan Thursday. Many businesses also closed in Washington, Atlanta, Philadelphia and Austin, Texas.

You can check out what southwest Detroit looked like on  "A Day Without Immigrants" here.