A day after Detroit building officials first posted eviction notices throughout a portion of the Russell Industrial Center, there was rampant confusion at the complex over how many of its more than 140 tenants would actually have to leave and whether they would be out for good.

On Monday, the city's Building, Safety Engineering and Environmental Department told tenants at 1600 Clay that they were to vacate immediately. The department waited until Tuesday to deliver the same message to those who have studios, offices and other business-related spaces at 1610 Clay. At issue, the city said, were illegally installed plumbing and heating systems. The operators of the Russell had also failed to obtain proper permits to construct commercial and residential tenant units. The city said the facility can only legally operate as a factory.

While the eviction notices said to leave immediately, city spokesman John Roach told Metro Times the building department's intention was to have tenants stop operating right away. They would have a week to move out. 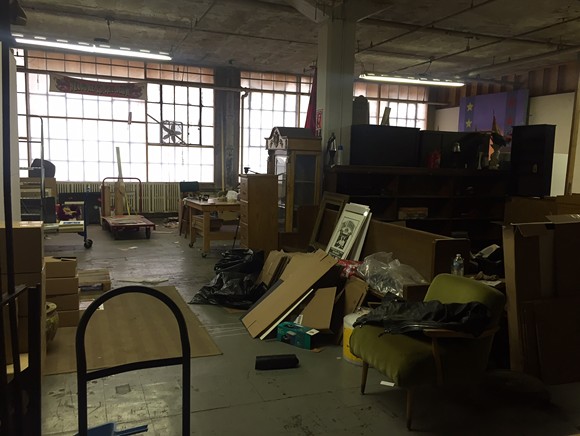 That seemed to be the message tenants were operating under Tuesday as they packed up what in many cases were their livelihoods. And they were buoyed by word from optimistic Russell officials who believed they'd eventually be able to again operate inside the complex; tenants told Metro Times that at one point, someone with the Russell's management office was walking the halls of 1610 Clay telling people to stop gathering their possessions because the building would be brought into compliance. 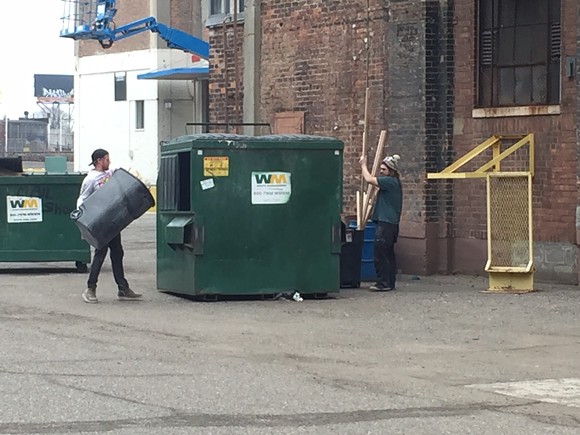 That all changed Tuesday afternoon, however, when a tenant says a Detroit building inspector showed up and told people to get out immediately and leave their belongings behind.

The mixed messages were particularly frustrating for Kory Trinks, who uses the Russell as a store room for her Eastern Market boutique, Blue Velvet Vintage. Trinks had shown up with hired helped Tuesday to begin the monumental task of hauling her several-ton vintage collection out of a space on the second floor of 1610 Clay — a building without a working elevator. 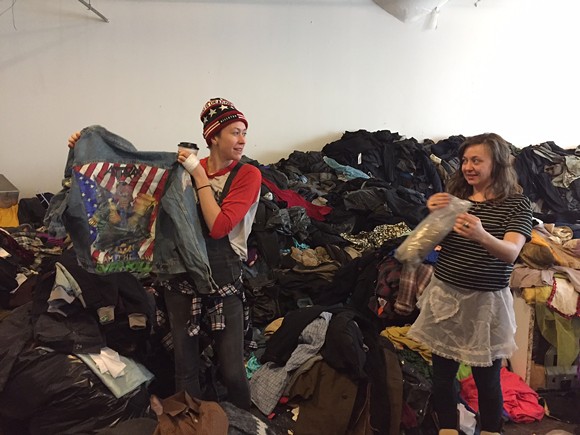 "Getting it out has been the biggest challenge," said Trinks, who conceded she'd have to leave much of her inventory behind because it's too hard to transport. "I might get a construction shoot from Home Depot and throw it all out the window."

While the loss would likely cost her thousands of dollars, Trinks said it was nothing when compared with tenants who would lose their jobs along with their space in the Russell. The facility serves as the headquarters for dozens of businesses, among them online retailers, glass blowers and furniture makers. The Detroit News talked to one glass blower whose furnace was built in place and could not be removed. Another tenant told the paper she would have to close down her online store if she lost access to her inventory.

Some tenants considered pursuing a class action lawsuit against the landlord of the building for leasing units without obtaining proper permits. The building is owned by the Clay Street Group, a subsidiary of Boydell Development. Boydell is owned by Dennis Kefallinos.

The Russell's operations manager, however, pointed the finger at the city, which he said has begun to heavily scrutinize the complex following the deadly Ghost Ship fire in Oakland last year.

Novak plans to meet with city officials on Wednesday as he tries to keep the facility operating. He has also mounted a #SaveTheRussell effort on social media.

The head of Detroit's Building, Safety Engineering and Environmental Department, meanwhile, is said to be working to clear up confusion for tenants who weren't sure by when they would have to be out.