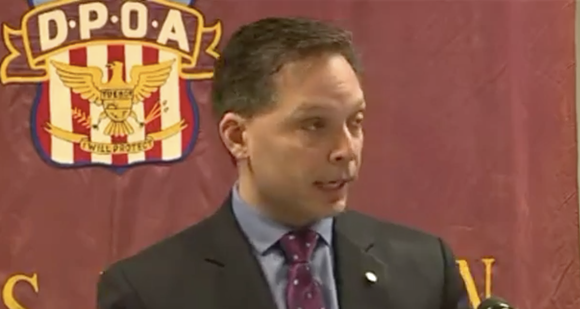 The head of Detroit's police officers union has been suspended without pay from the Detroit Police Department after being charged with malicious destruction of property in Oakland County.

Detroit Police Chief James Craig tells the Detroit News that the department has launched an internal affairs investigation into Diaz. Michigan State Police are conducting a separate probe. Craig told the News that the union board will decide whether to keep Diaz in place as president.


The Detroit Coalition Against Police Brutality calls the allegations against Diaz black eye for the department.

“[The charges] are a reflection on Diaz's judgment and character," said coalition Director of Operations Chris White. "What we wanna know is how long ago was this warrant issued and signed and were Chief Craig and Diaz both aware of this?"

"To say I was shocked by the charges is an understatement, but I have the greatest respect and confidence in our justice system and I trust this matter will be adjudicated expeditiously," Diaz said in an email.