District Detroit: Want to sell a neighborhood that doesn't exist? No problem!

That was two years ago, when we first read the exciting copy regarding the neighborhoods falling under the District: Detroit umbrella. This was just about the most remarkable marketing effort we'd ever seen, using a website packed with prose aimed at your average millennial all about a neighborhood that didn't really exist yet. We had written:

Not only are the marketers selling something that doesn't exist yet, they're selling something that may not exist at all. Outside of these broad and vague ideas, and an understandable desire by the Ilitch organization for developers to break down his door with plans, nobody really knows what this place will look like in 10 or 20 years, do they? All this "The District Detroit" represents is a marketing contract and some broadly hip ideas designed to appeal to a generation that could be old enough to retire by the time this project is off the ground for all we know.

It's worth taking a look at that post from two years ago, if only to compare the sales talk with the actual reality on the ground. We couldn't resist. In fact, we teased the District last summer, comparing their marketing to the smooth patter of a confidence artist.

Then came a recent video promoting the District, and we just have to comment again because it is an even more audacious marketing effort than before.

Take a look at this mini-montage showing two joggers and a couple shopping. There's a slight chance we could be wrong, but we can't think of a single place in the vicinity that looks like this. In other words, this is stock footage being used to sell a neighborhood that doesn't exist. Doesn't that take some cojones, people?

Or look at this clip touting new restaurants, new bars, new parks, and new shops. (Check out that lady shopping. What is she on? Ladies, don't go shopping on Molly.) Well, it goes without saying that all this shit will be new because there's nothing there right now.
And "new" isn't always "better." You know what else is new? The Arby's on Livernois in Troy.

And, of course, there will be new housing. Strangely, your new housing will be somewhere on the Upper West Side of Manhattan by the looks of this clip.
I mean, come on! Even in the fevered imagination of Olympia's copywriters and marketers, does anybody believe that the finished product will look like this? This bit of marketing shows some serious balls of steel.

Yes, the district will comprise 50 blocks. And it may well be full of young people super excited about crossing a street on a sunny day. But what is this scene? Does it matter? It almost looks like they're leaving Central Park in New York.

But then once the camera pans to follow these young people, it appears the scene may actually be in Europe. 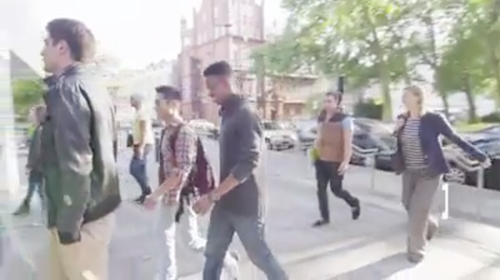 But, hey, what does it matter, right? It's all about getting people excited about something. Whether it exists or not, or whether you're actually showing it or not, hardly matters. Now that's some serious marketing!