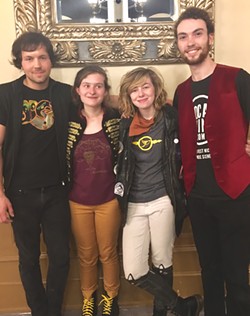 Detroit was well-represented in Austin, Texas last week at the South by Southwest festival, which now draws hundreds of thousands of attendees and performers from across the U.S. and from over 80 foreign countries.

Competition to showcase at SXSW is fierce, and Detroit and Michigan-based artists managed to snag a good portion of the coveted official slots and unofficial parties. The Accidentals, who signed a deal with Sony Masterworks earlier this year, made the biggest splash, with performances at seven different venues during the fest. Indie-pop duo Valley Hush made six stops around Austin during the festival, and Detroit rapper/vocalist Dominique Rhodes logged three performances.

Here’s hoping that Detroit continues to make a big noise at SXSW!

Artists who want to register for official showcases in 2018 can submit starting in July: sxsw.com