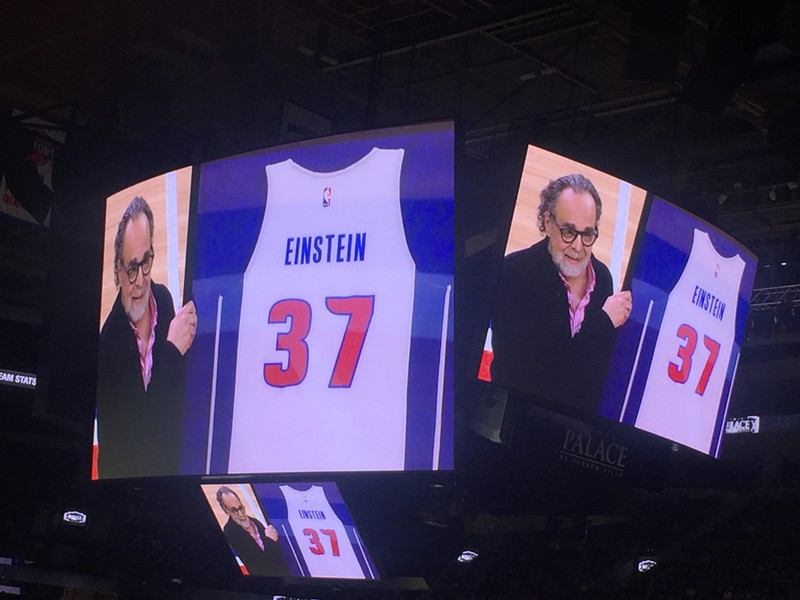 The Pistons organization has bid farewell to its longtime photographer in a series of goodbyes leading up to the team's final game Monday at the Palace of Auburn Hills. Allen Einstein documented the Pistons players and ownership for 37 seasons that included the organization's entire run at the arena, which opened in 1988.

Though he spent many nights on the hardwood during that stretch, Einstein spent most of his days inside the classroom, teaching special education and non-traditional learning to students who have trouble in a regular school setting. Now retired, Einstein runs a non-profit that aims to give southeast Michigan teachers the tools to help at-risk youth.

We caught up with the man behind the camera after he was honored during the Pistons' game against the Toronto Raptors last Wednesday to hear what lessons he's drawn from his nearly four decades with the team. You can find some of his favorite images further down.

MT: Did you have any sports photography experience?
AE: "I'd always done photography —  I worked for a newspaper, I taught high school photography — so I knew what I was doing and I certainly learned how to shoot NBA games. Luckily there are some things people are talented in and this is just something I can do. I have no formal training in it at all, but I have a good eye."

MT: What's been the key to your success in this role?
AE: "Everything is automatic focus now, anyone can use camera — or a phone — to take pictures — but it takes a personality to know when to talk, when not to talk, and being professional in how you treat people and respecting people's time and the aura of being an NBA player."

MT: What makes a good shot?
AE: "A good shot has to have an expression on the face, it's got some intensity, some sweat, something that speaks to your senses as opposed to just an image. If you look at most photography, it's all the same thing, but good people do different angles, they take things from above, they take things from below, they try new things and experiment."

MT: What's been your favorite part of this job?
EA: "More than just shooting the pictures is really the experience and realizing that athletes are just people, they make a lot of money and they're looked up to, but they're all human beings and they have their personal sides."

MT: How have you been able to use this position to help your students?
AE: "A lot of the players respected me and came into my classroom and gave their time helping kids that needed help. There was one player who was gonna come in and talk to my special ed class one day and spend an hour with my students. He ended up staying all day and went out to McDonald's and bought them all lunch, so you see a side of these players that is humane and wonderful."

MT: Who were some of your favorite players to get to know?
AE: "Real top is Vinnie Johnson, Grant Hill, Chauncey Billups, Joe Dumars, Isiah Thomas... I could go on and on. They're human beings and real people... really sincere."

MT: Can you give some anecdotes involving these guys?
AE: "Chauncey Billups came to my classroom [when I taught the kids in Birmingham who weren't doing well in a traditional setting] and he told them about some of the things he did wrong when he was young and how he overcame. Grant Hill did that too. They came and spoke as people, not as professional basketball players. When you have somebody who's not successful, most of the time it's because they don't know what success is and they don't know how to set goals and achieve things. These players took the time to come in and talk to the kids as people, not just students who weren't doing well or who had problems."