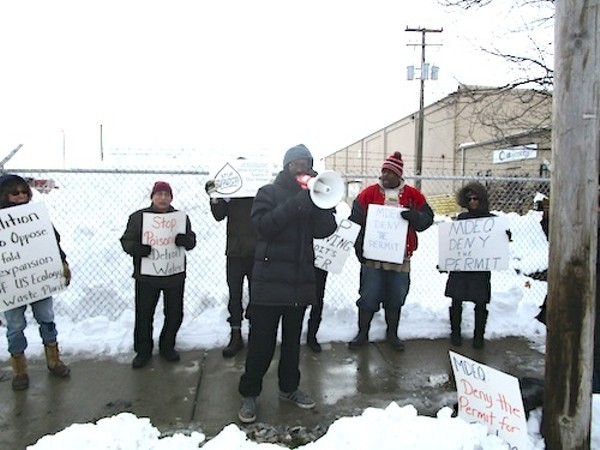 Activists opposed to the tenfold expansion of a hazardous waste facility in Detroit are urging people to join them in speaking out at a hearing on the plan Monday morning.

The plan to expand the facility owned by U.S. Ecology, based in Boise, Idaho, has been the subject of our coverage before. A few weeks ago, we featured Rufus McWilliams, a neighborhood activist whose worries include not just the proposed expansion, but several other industrial neighbors that jangle the nerves of residents.

According to the information put out there by the Coalition to Oppose the Expansion of U.S. Ecology, McWilliams and others in the neighborhood have reasonable concerns. The new, expanded toxic waste facility would be within a mile and a half of a public playground, Dickinson East Elementary School, the Oakland International Academy charter school, churches, mosques and many residents. The facility would be less than a half-mile from Hamtramck, Michigan's most densely populated city.

Comments from the Great Lakes Environmental Law Center filed with MDEQ are nothing short of alarming, including the statement that the "volume of storage of new waste and the number of new chemicals ... is staggering. Many of the hazardous waste chemicals ... are known human carcinogens, such as arsenic, benzene and vinyl chloride. Other chemicals disrupt hormones and harm the immune system. In short, the hazardous wastes accepted at this facility are the ... most dangerous known to man."

Activists also warn that the Great Lakes Water Authority has given U.S. Ecology permission to dump "a stew of toxic chemicals and metals such as mercury, lead, arsenic and cyanide into the sewer system at a rate of 300,000 gallons per day." In a part of town where narrow old sewer pipes often cause sewage to back up into homes during flooding, that's got to raise some concerns.

This is not to necessarily say that the Detroit Economic Growth Corporation, which wants more industry to locate in the area's industrially zoned sites, are bad guys. Chances are they see more industry as a way to buoy tax revenues, which offers more money to pay for city services. Even the beleaguered DEQ, which activists say is poised to approve the permit, is just doing its job to ensure the proper bureaucratic hoops are jumped through. By most accounts, all parties are following the rules of the necessary process for the expansion.

But part of the process is citizen involvement, the same sort of citizen involvement that makes companies that process and store hazardous waste less likely to locate a facility in, say, Birmingham, East Grand Rapids, or Grosse Pointe Shores.

And that's why coalition activists are strongly urging residents, neighbors, and concerned citizens to join them tomorrow morning at a public hearing of Detroit City Council's Health and Safety Committee.

The hearing takes place at 10 a.m. Monday, April 24, on the 13th floor of the Coleman A. Young Municipal Building, 2 Woodward Ave., Detroit. For more information, see the group's website.