Hamtramck City Council erupts in screaming, swearing, and little else 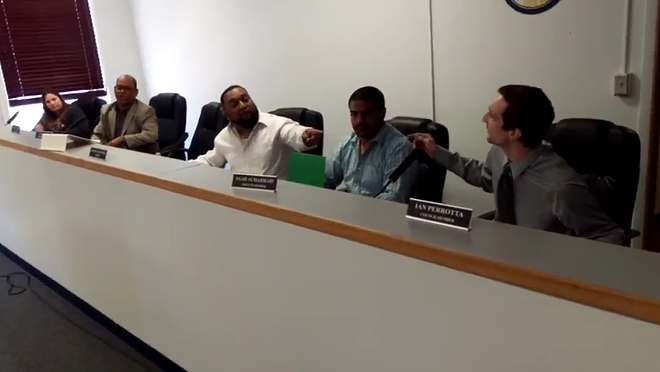 But it's only by comparison, and courtesy of the Hamtramck City Council.

That body met for an emergency meeting today, and, depending on who's talking, the reasons may differ. (Luckily, a series of videos — 1, 2, 3, 4, and 5 — are posted online so you can draw your own conclusions.)

Essentially, a block of four councilmembers were prepared to let the city manager's contract expire and to initiate a search for a new city manager.

It's no secret that relations between Councilman Anam Miah and city manager Katrina Powell have been strained. But in politics, you sometimes work with people because larger things are at stake. In this case, for instance, it's a $2 million loan from the state of Michigan lent on condition that the little city keep a city manager on staff.

Hence the importance of working with Powell, lest the city's Receivership Transition Advisory Board — the body keeping an eye on the city in the wake of its stint under emergency management — call in the loan, which the city probably could cover, but not by a whole lot.

However, as the crowd filtered into the council chambers, it became clear that plenty of the city's most engaged residents were opposed to letting Powell go, thereby incurring the wrath of the RTAB. (It may not look that crowded in the video, but the chambers only fill up like that when the council is discussing marijuana or the regulation of ice cream trucks.)

As the videos show, various people on Hamtramck City Council can be utterly dysfunctional — especially when Mayor Majewski is away visiting her mother.

In the end, after all that rancor, nothing binding was passed at the emergency meeting. After the block of councilmen voted unanimously to let Powell's contract expire, the city lawyer was able to tell everybody, after much shouting, that the body needed five votes to terminate a contract.