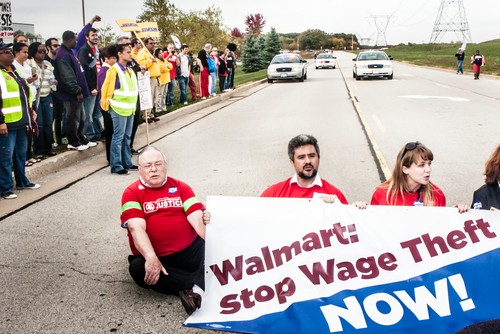 A new report finds that Michigan employers steal as much as $429 million from the state's low-wage workers.

The report, released Wednesday by the Economic Policy Institute, a nonpartisan research organization in Washington, D.C., is one of the first attempts to quantify just how much money employers in the 10 largest states steal from their employees.

But is it "stealing"? Is that too strong a word?

The report's co-author, EPI's senior analyst David Cooper, tells us, "It’s theft in the same way that somebody sneaking into your home and stealing jewelry is theft. It’s just more abstract because it happens in ways that are harder to perceive."

According to the study, the multimillion-dollar heist is the cumulative effect of many small cheats. Sometimes, it can be as blatant as an employer doctoring a pay sheet. More often, it happens when managers demand workers arrive early to set up their stations before they punch in, skip a meal break, or stick around for an extra hour after punching out.

It can also be a matter of intentional misclassification, as when employees are listed as independent contractors earning a set amount for a week's work, even though they should be considered regular employees and paid at least minimum wage.

The report also finds that, the lower your income, the more likely your employer is to steal from you.

"In Michigan, 4.5 percent of eligible workers report being paid less than the applicable minimum wage," Cooper says. "That may not seem like many folks, but if we look at low-wage workers, that is the bottom 20 percent of wage earners, that’s a little less than 1 in 5 workers reporting an hourly wage that’s less than the minimum."

The amounts lost each week may seem small — just large enough for a decent bar tab at a hip nightspot, perhaps — but they are significant chunks of change in a low-income context.

"We estimate that the folks suffering a violation on average are losing $63 a week," Cooper says. "And they should have been getting $232 a week. So they’re losing about 27 percent of their earned wages."

That hits especially hard in a state like Michigan, where 1 out of every 5 Michigan children is being raised in poverty, and an even higher rate of children (1 in 4) face poverty in rural counties.

The report also points out that wage theft hurts more than the people being stolen from. It hurts other workers, who thereby have their wages suppressed through illegal means.

But it also leaves taxpayers on the hook: Those suffering minimum wage violations are nearly three times as likely to require housing subsidies, and two-and-a-half times more likely to need home energy assistance, when compared with the overall minimum-wage-eligible workforce.

Now, remember: This research is all about the money that is stolen from low-wage workers due to illegal activity that nobody should defend. (Well, nobody outside a lawyer on retainer.)

"I would argue that even pro-business folks would be upset if they learned certain businesses weren’t following the law," Cooper says, "and therefore had an unfair advantage against their competitors."

In fact, given all the heated rhetoric coming from law-and-order types in GOP country arguing against minimum wage hikes and in favor of getting people off government assistance, you'd think going after wage theft would be a win-win issue: Get tough on lawbreakers while helping fight poverty by returning hundreds of millions of dollars to the people who earn it every year.