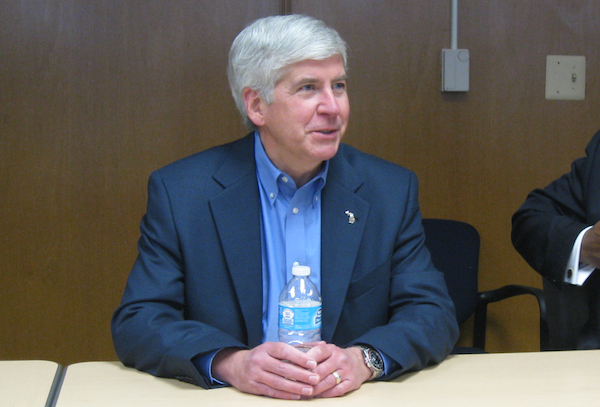 We discussed it earlier this month: Some 8,000 Flint households will face tax foreclosure for not paying water bills — even though the water was deemed unsafe for drinking.

As we all know now, the untreated river water caused lead and other contaminants to flake away from the inside of the pipes, and Flint taps were soon flowing with a brown, foul-smelling liquid that caused rashes, hair loss, destroyed water heaters, likely damaged the brain development of thousands of children, and led to the death of at least a dozen people.

Almost immediately, people in a position to know were fully aware something was horribly wrong. In October 2014, General Motors stopped using Flint water when it notice chloride levels were high enough to corrode metal. In January 2015, the state government quietly installed water coolers containing purified water installed Flint State Office Building. In July 2015, a researcher found lead levels in one sample of Flint water to be 900 times higher than what the EPA considers problematic; officially, it would be categorized by the agency as "hazardous waste."

If that weren't enough, consider that Flint residents paid just about the highest rates in the country for this quality of water.

Finally, in October 2015, after being badgered by reporters and researchers who knew something was wrong, the state DEQ admitted that the water in Flint was unsafe to drink.

Here we are, more than a year-and-a-half later, ample time to figure out if justice has been done.

Almost any rational person would think that it would be Gov. Rick Snyder and the state's GOP legislators who lose their positions in the houses of government for their roles in routing hazardous water into homes.

Instead, we now know who's likely to lose their homes: The people of Flint who dared not pay the bills for water they are afraid to drink.

News came yesterday that the ACLU and the legal defense fund of the NAACP are stepping in, urging Flint City Council "to suspend local efforts to impose property liens on thousands of Flint homeowners for failing to pay delinquent bills for contaminated municipal water — which has been unsafe to drink for more than three years."

Kary Moss, the executive director of the ACLU of Michigan described the water bills as exorbitant and unjust, and told the council" "The city has the power to put a moratorium on home foreclosures which is the only equitable solution resulting from this tragedy. The suffering of Flint residents should not be compounded by the loss of their homes."

Moss added: “No one should be expected to pay for water that is not safe, and that has caused so much physical, psychological and financial damage. In a city where residents have been crying out for justice, even more injustice is being proposed.”

The Flint City Council is expected to vote on the ordinance at its meeting tonight.

And how is Gov. Rick Snyder doing this week? It's anybody's guess where he's staying: In his $2 million 4,644-square-foot Ann Arbor condo, or in his $1.4 million 10,600-square-foot house off Geddes Road in a gated community in Superior Township, the one with the indoor pool, wine cellar and movie theater. (Wherever he is now, at the end of the month he'll likely be up at the 11-bedroom, 9-1/2 bathroom governor's summer home on Mackinac Island, built in 1902, featuring a sweeping covered porch with breathtaking views of the Straits of Mackinac and the Mackinac Bridge.)

It's been a busy week for Snyder: He has issued important proclamations on such vital topics as neurofibromatosis, diffuse intrinsic pontine glioma, congenital disorders of glycosylation, and apraxia. He has ordered state flags to fly at half-staff in honor of a probation officer who recently died in a car crash.

Oh, and one other thing happened: The Michigan League of Conservation Voters gave Snyder a failing grade — an 'F' — saying:

In Michigan — a state surrounded by 80 percent of our nation’s freshwater — communities have every right to believe that their drinking water is clean and safe. Instead, the residents and children of one of our oldest urban centers were poisoned by their tap water, and officials in the Snyder administration and Governor Snyder himself are primarily responsible for this ongoing tragedy.


But it's a rare sour note in the charmed life of Rick Snyder. In that wonderful world of "relentless positive action," it's the little people who risk losing their homes, their health, their very lives.  No flags at half-staff for them.