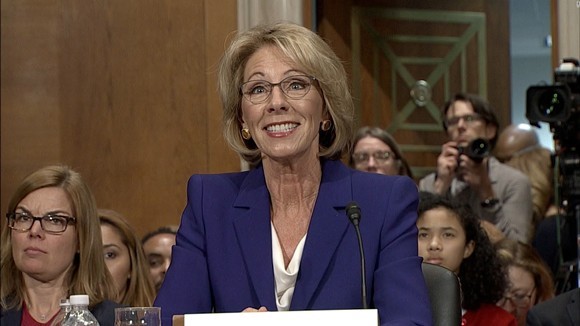 As Jack Lessenberry pointed out in yesterday's column, next to mortgage debt, Americans are drowning in student higher education loan debt, which is now nearly $1.5 trillion. He had said, "Thanks to steadily declining government support for higher education, students — some of whom never graduate — run up obscenely bloated tabs, which many will never be able to repay. ... You might call them the 'student loan serfs.'"

Naturally, student loan debt is a huge issue for the young people who are most likely to incur it. It's only likely to become more of a hot-button issue as time, rising college costs, and a sluggish recovery grind on.

This week, the outlook on student debt just got worse — unless you're a banker.

The Washington Post reports that it has obtained budget documents showing that the new education budget would funnel hundreds of millions of dollars into "school choice" and that some of those savings could come from the recommended cancellation of a public-service loan forgiveness program.

The program, the Public Service Loan Forgiveness Program, was instituted under President George W. Bush in 2007, and extended the promise of loan amnesty to those who worked in public service for 10 years while making their loan payments.

That means that a lot of people took lower-paying jobs in public service instead of the private sector so they could participate.

It also means that a lot of people took on expensive loan debt because they believed the government would grant them amnesty after putting in a decade of government work.

And, given the timeline, if the budget did strip away the program altogether, it could mean that nobody ever receives the loan forgiveness because it would have been canceled mere months before anybody could properly qualify to receive the benefit.

It would outrage hundreds of thousands of people who made their regular payments believing the government's promise that a reward for their service was on the way. (I should know. I'm practically married to one of them.) They've spent years working as social workers, teachers, public defenders and administrators. The first batch of amnesties was set for October.

It's reportedly unclear if the recommendation will make it into the version to be sent to Congress this coming Tuesday. The measures would require Congressional approval. (Can you hear those 202 area code calls being dialed right now?)

It should be quite a dust-up. Because when you break a promise with more than 500,000 people working hard to hold up their end of the bargain, you can probably expect to get a real education.