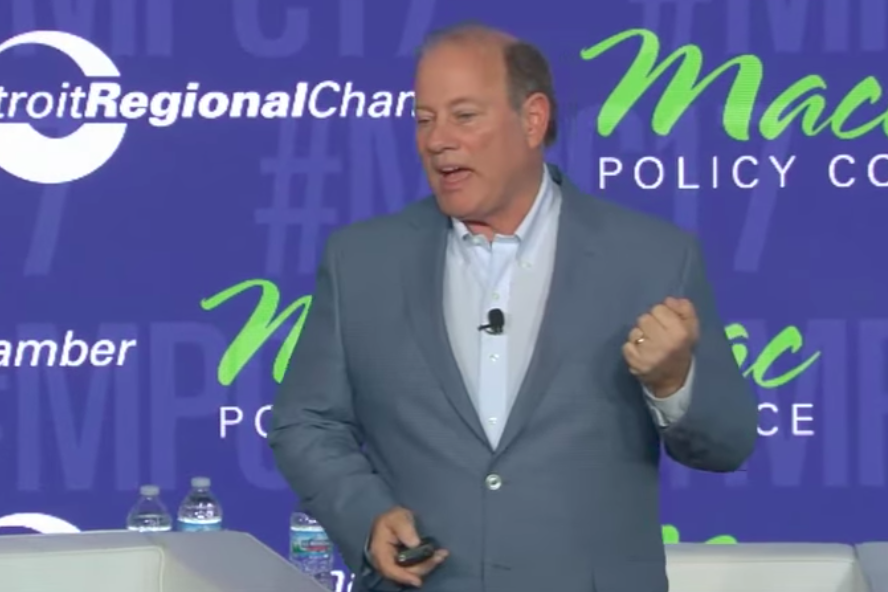 As part of an ongoing election-year push back on the "Two Detroits" narrative, Detroit Mayor Mike Duggan yesterday at the Mackinac Policy Conference outlined an inclusive guiding principal for the city's redevelopment: "One city. For all of us."

The mayor spent the bulk of his nearly hour-long address speaking on development and displacement, and how the city would continue developing without driving out longtime residents. And, as he did in his February State of the City speech, Duggan spent a good amount of time highlighting the many things he says his office is doing for Detroit's neighborhoods.

This time, however, his message was accompanied by a sort of diss-tweet, posted right as he wrapped up his comments in Mackinac:

By listening to the media, you'd think everything is happening in downtown & midtown. Neighborhood residents know that's not true. #MPC17


One man who has doggedly covered Duggan's administration did not take too kindly to the claim and — as we were gathering information trying to rebut various points made yesterday by the mayor – unleashed a tweet storm that made our jobs somewhat easier.

1/ You stand hand-in-hand with Gilbert and the Ilitches touting development that is displacing residents. https://t.co/E4MuLsaOWz

2/ you held secret DDA meetings to give billionaire Tom Gores tax dollars that should stop being captured for downtown. https://t.co/E4MuLsaOWz

3/ You displaced buses to make way for the QLine, a novelty for visitors. https://t.co/E4MuLsaOWz

4/ There are more police on one block of downtown than there are in each precinct in the neighborhoods. https://t.co/E4MuLsaOWz

5/ You hijacked the Historic District Commission so the Ilitches could tear down a historic building. https://t.co/ZWIYZRtESg https://t.co/E4MuLsaOWz

6/ You claimed every neighborhood has a future while neglecting many of them. https://t.co/E4MuLsaOWz

7/ You secretly worked with the state-appointed EM to rid the city of Citizens District Councils. https://t.co/wkrHz76wdu https://t.co/E4MuLsaOWz

8/ Your program to demolish houses is under federal investigation on allegations of favoritism. https://t.co/E4MuLsaOWz

9/ We were forced to sue you to reveal records about broken hydrants in the neighborhoods. https://t.co/mcGkSO2AmR https://t.co/E4MuLsaOWz

10/ You chose to live your adult life in Livonia, one of the whitest suburbs in Michigan. https://t.co/E4MuLsaOWz

11/ You're fining residents in neighborhoods $1,000 for blight while dishing fines of half that to developers. https://t.co/E4MuLsaOWz

12/ You were a leading opponent of Proposal A, an ordinance to require developers who receive tax breaks to guarantee jobs to Detroiters https://t.co/E4MuLsaOWz

13/ You imposed new, expensive drainage fees that will force small businesses and churches to close. https://t.co/E4MuLsaOWz

14/ You're an advocate of one of the most inhumane water shutoffs in American history. https://t.co/E4MuLsaOWz

Now, of course, we cannot confirm all of Neavling's claims. Some of them are based on his own reporting and others could be based on anecdotal evidence (like the uneven allotment of police officers throughout the city and discrepancies between blight fines for residents and developers).

We can, however, confirm that excessive blight tickets from Detroit's Building, Safety Engineering and Environmental Department (BSEED) do result in criminal penalties (tweet 15); that Duggan did nominate the head of the agency responsible for water shutoffs (tweet 14); that small businesses and churches are at risk of closing due to drainage fees (tweet 13); that the mayor did indeed oppose Prop A (tweet 12); did live in Livonia for a while (tweet 10); has prioritized certain neighborhoods over others (tweet 6); did re-route buses to accommodate the QLine (tweet 3); and does support development by Dan Gilbert and the Ilitch family that, in some cases, has priced people out of various parts of town (tweet 1). And of course, Duggan's ambitious demolition program is under federal investigation (tweet 8).

We've reached out to the mayor's office seeking comment on all of the above.

Motor City Muckraker's Twitter rant followed the Mackinac Policy Conference speech Duggan delivered Wednesday, during which he said his administration was entering a new phase with city services largely restored. Residents could now anticipate "a lot of conversation in Detroit about equity and inclusiveness," Duggan said.
The following list includes the eight tenets Duggan says support his "one city" vision:
1) Everyone is welcome
2) His office won't support a development if it displaces Detroiters and moves outsiders into their homes
3) His office will fight economic segregation and ensure there's a place for people of all incomes in every section of Detroit
4) Blight removal, but saving every house possible
5) A focus on neighborhood density to create walkable areas
6) Detroiters will have an active voice in shaping their neighborhood's redevelopment
7) Jobs and opportunities close to neighborhoods
8) A Detroit riverfront that belongs to everyone