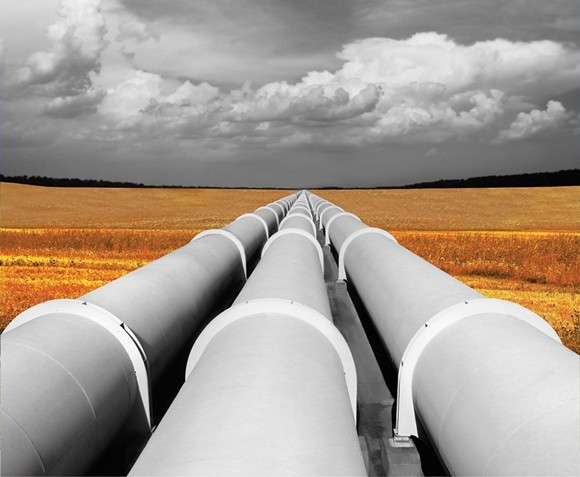 Readers may recall our piece from March, about resistance to the proposed construction of the Nexus pipeline. The pipeline, in which DTE Energy is part owner, is essentially intended to carry natural gas fracked from the western Pennsylvania area to the Dawn Hub in Ontario for sale to Canadian buyers. Along the way, it would have to pass through Ohio and Michigan, including some urbanized areas in Ypsilanti Township.

Here’s what’s happened since then, and what’s coming up.

Nexus remains at a standstill, as it never was officially approved by the governing federal agency, FERC (rhymes with “quirk”). That commission has lacked a quorum for several months now, since the resignation of Chairman Norman Bay on Feb. 3. Nexus was to be voted on by Feb. 28, so those fighting against the pipeline have enjoyed a sort of three-month “grace period” — one that could end soon (more on that in a moment).

Another pipeline — ET Rover — following roughly the same route, was approved during the last week FERC had a quorum. Construction began immediately.

It’s almost as if the Rover people have been determined to prove critics of pipelines right: In less than four months, the pipeline builders have seen 18 leaks, and reportedly spilled more than 2 million gallons of drilling fluid — covering more than 6 acres of wetlands along Ohio’s Tuscarawas River with a muddy soup of clay and bore-hole cuttings. Ohio’s EPA has fined Rover’s owners $400,000. Now even FERC has said Rover can’t proceed without third-party supervision.

The situation with ET Rover in Ohio is firing up residents in the Pinckney area, where ET Rover is planned to run. They’re reportedly petitioning the Corps of Engineers, demanding that the corps revoke its nationwide permit for Rover, and impose individual permit requirements for each of the planned 45 water crossings.

And that’s just the news on the pipeline that was approved. The Nexus pipeline is at a standstill until FERC gets a quorum and votes on it.

That quorum is on the way. The Senate Committee on Energy and Natural Resources began hearings on President Trump’s nominees — Neil Chatterjee and Robert F. Powelson — on May 25. The Energy and Policy Institute has called Chatterjee a “rubber stamp for fossil fuel and utility interests,” and Powelson, who found himself in hot water earlier this year for calling opposition to pipelines a “jihad.” (Nice touch there, Powelson.)

Needless to say, when it looks like frack-friendly appointees are going to start making calls on what pipelines get approved, local groups are energized faster than you can say “conflict of interest.” (In fact, FERC faces a lawsuit over its pipeline-happy outlook, and more than 160 groups are demanding that no new commissioner be appointed until FERC is investigated for rubber stamp-style approval of these pipelines.)

Locally, opposition seems to be coalescing. Already Augusta and Ypsilanti townships have passed resolutions opposing the pipeline. Now we hear Washtenaw County Commissioner Michelle Deatrick is organizing a town hall meeting to discuss the matter, featuring a panel of legal, energy and environmental experts. As the flier points out, the natural gas pipeline would carry "1.5 billion cubic feet per day of fracked natural gas though Augusta, York, and Ypsilanti Townships. Construction could begin in 2017 through our rural and urban communities and within 400 feet of a school."