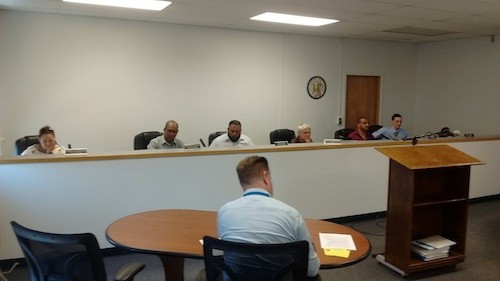 In a stormy meeting last night, Hamtramck City Council approved the hiring of a new city manager by a slim majority.

The meeting appeared to be the culmination of a long-running campaign by a majority of the city council to unseat City Manager Katrina Powell and replace her with somebody more to their liking.

The minority, which supported extending Powell’s contract, has taken issue with the way a four-person bloc has pursued its goals. Last night’s meeting included charges of collusion and violation of the state’s Open Meetings Act. The minority was supported last night by a vocal group of Hamtramck residents complaining that their opinions are not being taken into account by the majority group exercising control on the council.


Backing up a bit, much of the disagreement dividing the council dates back to when the city was placed under emergency management in June of 2013. Gov. Rick Snyder appointed Cathy Square as emergency manager, and Square was granted the broad powers outlined by PA 436. In December of 2014, Square declared the city’s financial emergency over, and Square’s choice for city manager was Powell, who was reportedly also the top pick among several other candidates interviewed by city council.

You might expect a left-leaning, anti-EM-law publication like Metro Times to condemn Powell, given that her rise to power was a product of emergency management. Yet, Powell quickly appeared to be her own person. Instead of the slash-and-burn, privatize-everything approach characterized by the minions of austerity, Powell actually brought several city functions back into the public realm at significant savings. While our reporting has been critical of some of the ideas she has introduced, and she has been criticized for a lack of transparency, her record has mostly been that of a competent city administrator. It’s no easy task to handle fractious Hamtramck politics, and to communicate smoothly with the Receivership Transition Advisory Board that retains say-so over many city decisions. But Powell has been able to keep the gears of government grinding forward under difficult circumstances.

Some of her actions, such as her involvement in the departure of Police Chief Max Garbarino, or the hiring of Hamtramck’s first female chief, Anne Moise, were met with objections from Anam Miah, the president pro-tem of the council. As we’ve reported in the past: “Miah seems to bring a certain bad temper to city council meetings and work groups, and you wonder if it’s driven by resentment … because the conflict seemingly revolves around very small issues.”

And we can also understand the frustrations of the majority on the city council. As we’ve said before: “They struggled long and hard to get into office, and, when they got there, they realized they really have no power at all. Between a strong city manager and a transition advisory board that really call the shots, they're reduced to a group that votes yes on preapproved contracts and legislation.”


All these tensions began coming to a head last month, with the four-person bloc — consisting of Miah, Mohammed Hassan, Abu Musa, and Saad Almasmari — calling a special meeting while Mayor Karen Majewski was out of town and unable to attend. The majority voted to let Powell’s contract expire in a meeting marked by finger-pointing, screaming, and swearing.


Note well: The decision would leave Hamtramck without a city manager. And not having a city manager is a big, big deal for the little city, because a $3 million loan is contingent upon it having one.

So, needless to say, many were puzzled when the four-person majority of Miah, Musa, Hassan, and Almasmari voted against approving a contract to hire a firm to conduct a search for a city manager on Tuesday, June 13.

Others on council were also surprised that the council didn’t seem disposed to avail itself of the several qualified interim city managers offered by the Michigan Municipal League.

As Councilmember Ian Perotta has pointed out, when a four-member bloc on city council just apparently seems to act in lock-step — rejecting Powell’s contract, rejecting a search for a replacement, and calling a special meeting to approve an interim replacement with very little time to discuss his qualifications or for other councilmembers to even see a résumé — the conclusion that a quorum is meeting privately in violation of the state’s Open Meetings Act seems inescapable.

There is a process, endorsed by good government groups and the Receivership Transition Advisory Board, for finding an interim emergency manager. The Michigan Municipal League offers a list of interim managers, and conducts nationwide searches that attempt to match a city with a qualified permanent city manager; the searches can take as long as four months.

Instead of pursuing those avenues, it seems clear that the majority had decided to hire Tertzag before the meeting began.


This was what drew scores of residents to the meeting, about a dozen of which spoke out against Tertzag, the four-member majority, and several rumors that have been flying around town regarding the city’s prized police and fire services.

Councilmember Perotta spoke out most forcibly, giving an almost 15-minute-long speech that made several charges:

• Councilmember Miah refused to furnish information regarding Tertzag
• Councilmember Miah objected to the request being CC’d to other members of the council
• Miah furnished the resolution that Tertzag be hired just 21 hours before the special meeting
• Tertzag, as a member of the Allen Park City Council, approved spending $30 million on a film studio without voter approval, which helped put the city into financial crisis
• Tertzag was named in a lawsuit against the city of Hamtramck stemming from his time in the city manager’s office
• The majority bloc has a double standard in objecting to Powell because she has been named in a lawsuit, while Tertzag shares that distinction
• Miah shared the resolution with Perotta as a “courtesy”
• Miah and the other three members of the voting bloc are privately colluding, which is a violation of the Open Meetings Act

After this speech, which drew modest applause, Mayor Majewski noted that Councilmember Almasmari was apparently not listening, instead “cruising Facebook and Instagram” on his smartphone.

Tertzag was a surprise guest at the meeting. As resident after resident got up to speak to the council, whenever they complained about his shortcomings, Tertzag chuckled and shook his head. When he was asked to speak before the council and answer a few questions, he refused to disclose any meetings with councilmembers leading up to the resolution regarding his hire. He mentioned having contacted Miah within the last several weeks regarding the job. Under questioning, he admitted that he has not held any government jobs in the last several years, and that he has not taken any classes or courses during that time.

As residents made their comments, the overwhelming majority of which were unfavorable to the majority, those four councilmembers mostly looked down, or anywhere but the residents who were addressing them. Miah and Almasmari were out of order once, but they were relatively muted given past meetings.

Some of the speeches delivered by the residents were … a little wild. One woman loudly declared that the city was going to become “poop.” Several business owners expressed outrage and disgust. At least one homeowner said she was considering selling her home and moving. All in all, it was more heat than light.

But a few speakers seemed to display the sort of common sense any reasonable person would wish Hamtramck City Council would embrace.

To compress many reasonable statements into one speech: The majority bloc on council has accused the city manager of lying, of a lack of transparency, of being difficult to work with, and of being a relic of emergency management and therefore a threat to democracy. Even if all of that were true, the majority makes the same transgressions against truth, transparency, and democracy by using special meetings and a slim majority to shut down debate, shut out other points of view, and ruthlessly pursue an agenda that isn’t subject to discussion because it isn’t articulated.

Perhaps the worst part of this whole tragi-comedy is that Hamtramck is a small town where it doesn’t take much for rumors to fly. Already we’ve heard rumors that the Fire Department will be replaced by public safety officers; a fireman even spoke out against the idea at last night’s meeting. We’ve heard rumors that Tertzag would make more money than Powell, which is not true. We’ve heard that Tuesday’s meeting included voting down a trash contract, which is also untrue.

When the majority of the city council turns away from the fresh air and sunshine of public debate, concocts their plans in private, and then uses special meetings, narrowly controlled information, and lock-step voting to push an agenda, this is precisely the environment in which rumors not only flourish, they can’t be effectively quashed.


All that said, it’s worth noting that the situation isn’t all that unusual. Hamtramck politics have been dysfunctional ever since the first tavern appeared among the farmland and two people had their first disagreement. Truly, compared to the antics in Warren Council Chambers, which have verged on the antics of Wrestlemania, last night’s meeting was pretty tame stuff.

And these eruptions commonly take place when city managers are on their way in or out. Summer Minnick, the deputy executive director of the Michigan Municipal League, tells us staffing the city manager’s office is a difficult issue for cities to face, and some amount of acrimony is to be expected.

“It’s not unheard of,” Minnick says. “As you can imagine, when a community is parting with a manager, sometimes it’s under difficult circumstances, either between the manager and the elected body or among the elected body. So it is typically a stressful time for a community. We’re certainly aware of that. Sometimes these are very difficult times in the community. So they are certainly not the only city facing a tumultuous experience on parting ways.”

Truer words. But given all the strident voices at last night’s meeting, we're guessing you ain’t seen nothing yet. Yes, Tertzag’s hire as interim city manager, effective July 1, expiring Jan. 31, 2018, passed 4-3. But moments after the gavel struck ending the meeting, one attendee walked briskly up to Tertzag to remind him cheerfully that he didn’t have to accept the offer.

Buckle your safety belts, kids. It’s going to be a bumpy ride.