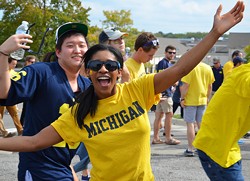 In an effort to increase access amid soaring tuition costs, the University of Michigan announced a new program that will make tuition free for in-state students who come from families that make $65,000 or less a year.

Dubbed the Go Blue Guarantee, the program will cover the full cost of tuition for up to four years of full-time undergraduate study at the university's Ann Arbor campus — a value of about $60,000.

"What we're concerned about is that there are lots of talented kids, and we know they're out there, who are a bit afraid of taking that risk of applying to school and then not thinking they'll be able to afford it," U-M president Mark Schlissel says in a statement. "So the notion is to tell them up front if you're talented and willing to work hard, regardless of what your family's income is, we will find a way to help you afford a spectacular college education."

More information on the program is available at goblueguarantee.umich.edu.