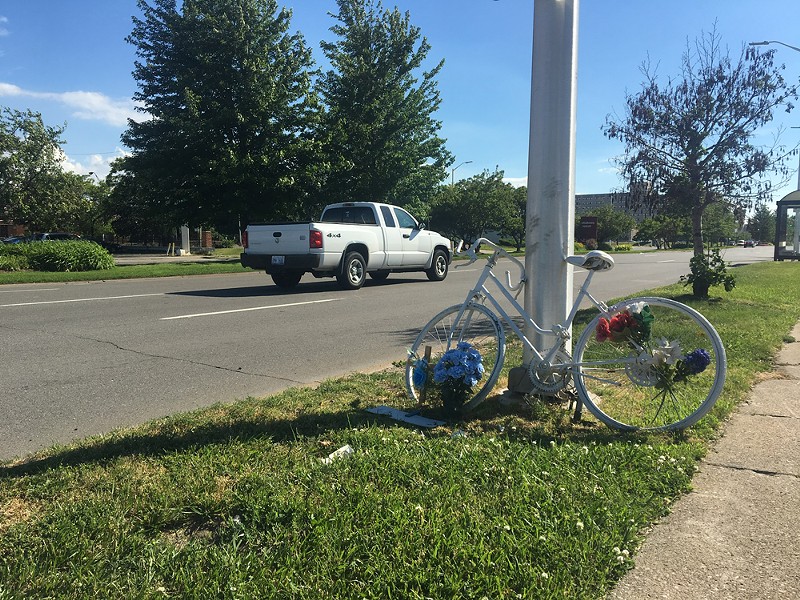 As the owner of a bike shop called Wheelhouse Detroit, Kelli Kavanaugh practically rides the city's streets for a living. At times, it can be a dangerous job: She's felt cars graze her skin and the whir of vehicles passing too close to her as she rides in the bike lane. Fortunately, she has never been hit, and says hyper vigilance and a fear that every car is going to break the rules of the road have kept her safe.

The 170 Detroit cyclists who reported a vehicle crash in 2016 alone were not as lucky.

Though cycling deaths in Michigan have generally been on the decline since the mid-1980s, over the past two years, the numbers have started to trend upward. In 2015, Michigan saw a 57 percent spike in deaths over the year before — from 21 deaths in 2014 to 33 in 2015, according to the latest data from the state's Office of Highway Safety Planning.

The cycling death toll continued to grow in 2016, with 38 people killed.

More than a third of the 2015 deaths occurred in metro Detroit, according to the Southeast Michigan Council of Governments. Detroit, specifically, was in 2016 ranked the second-most dangerous major U.S. city to ride a bike in when considering the number of bike commuters on the roads. The Alliance for Walking and Biking put it behind only Jacksonville, Florida, in number of bike deaths per rider, with 35 per 10,000 bicycling commuters (there are fewer than 10,000 bike commuters in Detroit, according to the alliance).

"You're a vulnerable user on the road," Kavanaugh says. "I understand why someone would feel unsafe, especially when you're just starting out."

As the city launches the citywide MoGo bike-sharing service, and with an increase of new cyclists on the road, Kavanaugh and Detroit bicycling activists say now is the time to prioritize non-motorized vehicle safety.

Detroit officials have been working to create a safer environment for non-drivers since 2006, when they began implementing a citywide plan for pedestrian and cycling infrastructure.

The Department of Planning and Development now reports 200 miles of bike lanes throughout the city, including three of the nation's longest protected bike lanes that put a physical barrier between cyclists and vehicles on the road.

However, other cities with more cyclists better prioritize bike safety. Portland, a city similar to Detroit in size and population density, has 350 miles of bike lanes with 50 more miles planned over the next decade. The entire state of Oregon reported only four cyclist deaths in 2015.

The danger for pedestrians and cyclists in Detroit comes from speed limits, distraction, and street design, explains Jeffrey Nolish, a mobility specialist in Detroit's department of planning and development. Detroit's major roads (which, ironically, were laid out in the shape of spokes on a bike wheel) were designed for the Motor City to accommodate up to nine lanes of fast-moving traffic with no features for cyclists or pedestrians.

"The fact that we're behind can also give us the opportunity to do things right," says Kavanaugh. "As more people are paying attention to this, it's becoming more sophisticated as to what is safer and user-friendly."

The changes have begun in greater downtown, where Nolish says safety improvements were most necessary because of high-volume traffic and other threats to riders.

"Everyone is well aware of the economy and that narrative, but the truth is a lot of people are getting hurt in that area and something has to be done." Nolish says most "hit-and-hurt" accidents in Detroit occur within the 7.2 square miles of greater downtown.

By the end of this year, the Detroit Department of Planning and Development will finish the first phase of its greater downtown pedestrian and cycling plan that builds new barricaded lanes on Jefferson Avenue and protected bike lanes on Michigan Avenue and Warren Avenue. The Department of Public Works estimates that the 3.4-mile stretch of protected bike lane on Michigan Avenue costs $80,000 to $100,000, paid for by state and federal grants and funds. It won't be clear until August just how much money will go into the full 13-year plan.

"The hope [with the protected lanes] is that drivers will drive slower and cyclists will go in the street. They'll be able to have their space as well," says Nolish.

But Kavanaugh says in a city with a rapidly growing bike culture, there is still a learning curve for both drivers and cyclists trying to safely share the road — even with the new lanes and signage. "There are bad drivers and there are bad cyclists, but I do think that there are a lot of drivers that legitimately do not know the rules of the road when it comes to cyclists," Kavanaugh says.

That's why the new biking designs have a rare opportunity to create safe infrastructure for riders of varying experience levels — like the Dequindre Cut expansion that directly connects neighborhoods for cyclists who are uncomfortable using main roads. "You can literally make design accessible to all or only to the advanced," says Kavanaugh.

In a city where over a quarter of households don't own a car and about 40 percent of people live below the poverty line, Nolish says cycling is a way to improve citywide mobility for low-income residents. Riding a bike can be a complement to the existing public transit systems and a viable alternative to Uber, Lyft, or taxis.

"Cycling infrastructure is like low-hanging fruit," he says. "It's good for everybody."

Kavanaugh says she thinks new protected bike lanes and repairs to crumbling roads are putting Detroit's cycling infrastructure on the right track for all riders — the traditional exercise cyclist, the mother and her two children, or the older couple out for a little bit of exercise.

"There are people in the city legitimately pushing for this stuff now, it's really cool to see," Kavanaugh says. "I'm hopeful."