Coalition meets to protect Detroiters from 'illegal foreclosure' next week 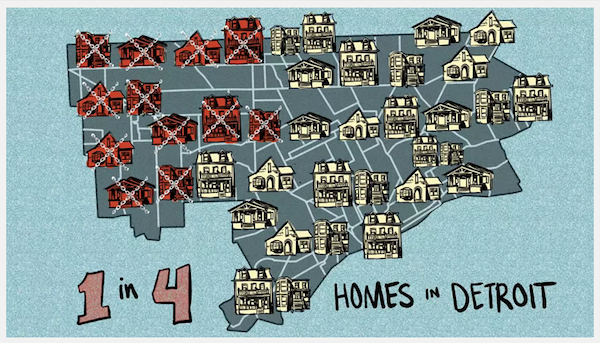 An event next weekend will offer a discussion forum on tax foreclosures, and to draw attention to what they call "massive, unconstitutional property tax foreclosure."

The group sponsoring the event is called the Coalition to End Unconstitutional Tax Foreclosures, a joint effort of many different community groups. Organizers will present the personal stories of three Detroiters subject to tax foreclosure and unconstitutional assessments. Their goal is to bring together Detroiters fighting to keep their homes, as well as to hash out a plan out the fight against banks and city government.

In a statement released today, the coalition declared, "The city of Detroit drastically overassessed the value of the homes of its poorest residents, meaning Detroiters had to pay property tax at rates far higher than they should have. The Michigan constitution states that homes must not be assessed at over 50 percent of their value.

But as Bernadette Atuahene, a Harvard- and Yale-trained law professor visiting at Wayne State Law School, has pointed out in a study and in recent editorials in The Detroit News and the Detroit Free Press, "between 2009 and 2015 the majority of homes were assessed at rates that violated the constitution because the city has not been assessing properties based on market value."

Atuahene presents a credible argument that many of Detroit's tax foreclosures are unjust and illegal, and that Detroit's poorest residents bear the brunt of it.

Actually, the complaints are spelled out quite well in this YouTube video, which explains why the problem may not be that people are too poor but that the system that governs them is running on autopilot, hitting them with inflated tax bills and not exactly smoothing the way to tax relief. (There's also a bit of earthy humor in this cartoon that should get you giggling a little.)