Gilbert's Bedrock says it will create 'affordable' housing in downtown Detroit. Here's what that actually means

This week, Bedrock — Detroit's largest developer — announced that it would create or maintain 700 "affordable" units in greater downtown Detroit as part of a commitment with the city to redevelop the area as an "inclusive, mixed-income community."

The "affordable" units will make up 20 percent of the 3,500 residential units Bedrock plans to develop over the next several years, putting the real estate company owned by Dan Gilbert in line with Mayor Mike Duggan's affordability requirement for residential developers receiving certain things from the city. 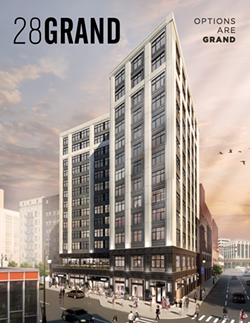 You may have noticed that we've opted to put the word affordable in quotes. That's because affordable means different things to different people. In this case, almost all of the units will be affordable for people living at 80 or 60 percent of the Area Median Income, which — as we've reported in the past — is inflated for Detroit residents because the median relies on a regional grouping of incomes in the Detroit-Warren-Livonia Metropolitan Statistical Area.

This year, the federal government calculated AMI for a family of four in the region at about $69,000 per year. In Detroit proper, however, median household income is listed at around $26,000. The city and Bedrock are basing affordability on the regional average.

To put that in terms of single-person household incomes, someone making 80 percent of AMI makes a little over $38,500 per year. Their rent would then be reduced to make sure they spend no more than about a third of their income on housing and utilities.

It's people living at 30 percent AMI and below who would benefit most from the housing help. The HR&A study found that for those poorest Detroit residents, just 23 percent have affordable housing options. But the city's housing and revitalization director has pointed out that developers can't provide units that cheap because they would lose money on their projects.

"There are far more already existing affordable units disappearing than there are affordable units being built and preserved," says Aaron Handelsman with the Detroit People's Platform, a network of Detroit-based social justice organizations. "So there's already a gap and the idea that [Bedrock is] doing anything to help plug the gap is misleading."

Yet, Detroit officials framed Bedrock's low-income units as helping address the rental assistance expirations looming for people at 2,000 units in the city. Researchers at the University of Michigan have found much of those are located in the greater downtown, where, without intervention, expiring units will likely flip to market rate and drive longtime Detroiters from their homes. More than 2,000 units receiving the federal Low Income Housing Tax Credit will have expired in that area between 2016 and 2020.

But even if Bedrock's affordable rental units

are just a drop in the bucket, there are other efforts underway to keep affordable housing options available for Detroit's poorest residents. Just yesterday, Duggan and the Michigan State Housing Development Authority announced they would create or preserve 400 units of affordable housing for "those at the city's lowest income levels." The mayor is also on board with a plan to create a so-called housing trust fund as part of a coming inclusionary housing ordinance that builds on his 20 percent affordability rule for residential developers (though Handelsman and other affordable housing advocates say a draft version of the ordinance does not provide enough money for the fund).

Opinion: As new development attracts new people, Detroit officials need to help keep the city affordable
By Aaron Handelsman and LaToya Morgan
Views
Regardless, when developers are championed for creating and maintaining "affordable" housing, it helps to put what they're offering into context.

Not one media outlet that covered Bedrock's announcement explained the difference between AMI and median Detroit household income (we're lookin' at you, WDIV, WJBK, D Business, and Curbed. Crain's too, but at least it put affordable in quotes). Noting that affordability rules in Detroit — a city where 40 percent of households live in poverty — are not exclusively based on the incomes of Detroit residents seems like a key step in covering developers who claim to be working to make Detroit's most wealthy areas "inclusive."