After a gray, rainy Tuesday afternoon, the sky opened up and people began lining up outside Fellowship Chapel Church for the Bernie Sanders and John Conyers town hall.

The event was held to discuss the issues of healthcare, specifically single-payer medicare-for-all, as well as jobs and unemployment.

“I’m concerned with the quality of life [in Detroit]. Nationwide it’s not so much [racial/identity politics anymore] because we are all suffering. This is a class situation,” said Sharon, an African-American woman in her late forties standing in line. Decked out in pins for Coleman Young II’s mayoral campaign, she was adamant that the era of Clintonism wasn’t sustainable for the Democratic party and had to come to an end.

“Using public assistance and stuff to try and make ends meet — the living conditions are just getting worse and worse and I see two different Detroits and I don’t like that,” she said.

These sentiments from Sharon regarding the present situation in America, and Detroit in particular, becoming ever more untenable were echoed by many others at the event.

Kristy, a worker at a Trader Joe's in the metro Detroit area and a self-identifying Democratic Socialist, was standing at the very front of the line in a tie-dye “Bernie 2016” shirt.

“It’s important to have discussions about jobs and healthcare, especially here in Michigan. Bernie Sanders has an extremely progressive platform. Young people in general, they see socialism as not what the Republicans say it is,” she said. “Capitalism is negative for me. It is very predatory, especially in the state it’s in now.”

This sense of needing to reconstruct America’s economic order was something that was buzzing amongst the line of people there. Later, a man pulled up his truck offering free hotdogs and other food to whomever wanted some, saying he was doing it because he’s a socialist.

Inside the church, another man was offering stickers for the Michigan Democratic Party. He turned to a nearby group of women, offering them stickers.

“Yeah, but who are you going to run?” one of the women responded.

He said his prepared 2020 line again and she more forcefully this time says, “Yeah, I have the sign on my lawn saying that and then Bernie Sanders but, I hope he runs independent this time.”

The man, caught a bit off guard, starts to try and reassure her. He tells her that he was a delegate at the DNC and cast his vote for Sanders.

She replied saying her son took off school to go to ten different states and campaign for Sanders. He didn't take any pay from the campaign, and she turned her home into a local campaign office. She says she's now a member of the organizing group Indivisible.

The man from the DNC backed away, stickers in hand.

As the event started, different speakers begin coming up to the podium, describing their trials navigating the maze that is the private health insurance marketplace. A common theme described was not being able to access preventive care and their ailments getting much more serious and life-threatening as a result.

Congressman John Conyers took to the podium to speak about the need for single-payer healthcare and the positive change that access to healthcare would bring about to communities of color. 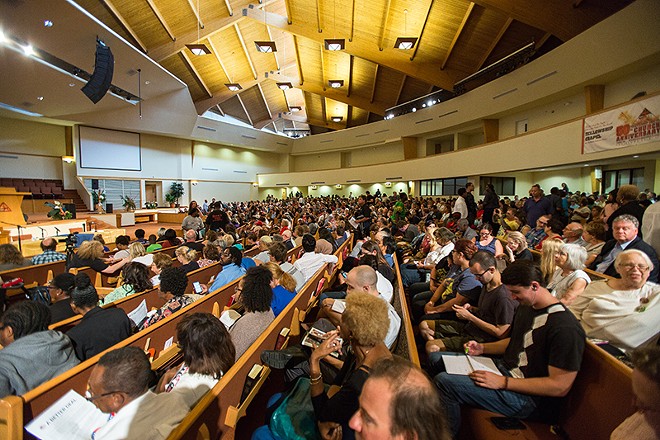 Sanders sat at the table quietly, taking everything in. He got up after Conyers and gave an impassioned speech about the need for universal, single-payer healthcare now. He addressed the need to reform our institutions and ways of working with capital so as to lessen the gross, runaway inequality we’re witnessing.

He also noted some of Conyer’s past successes, and over cries from the audience of “Bernie 2020,” he reiterated his commitment to fighting for single-payer, equal rights, and Democratic Socialism.

After the speaking portion, the audience began asking the two men questions directly. What began as general policy questions devolved quickly into statements and pleas to improve the material conditions of Detroit and the healthcare system more broadly.

Many of the people in the room were struggling financially, and attending the event in hopes to get a glimpse of the ideas that seek to liberate them from poverty. While the room was electric with this sense of political optimism, it wasn't enough to fill the void left by years of economic disenfranchisement.

Listening to Sanders and Conyers speak may have been an escape for a few hours, but at the end of the night, everyone had to walk back out into real world — where the social safety net has been slashed into a tight-rope, seemingly impossible for anybody to walk.