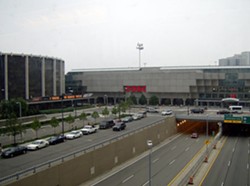 The move comes amid a a national debate about racist monuments and symbols following the recent clash over a Confederate monument in Charlottesville, Virginia.

In Detroit, you won't find any monuments to the Confederacy, but there has been mounting backlash of controversial statues in recent years, including Dearborn's Orville Hubbard and Christopher Columbus in downtown Detroit.

Crain's reports that Duggan has been in talks to rename the convention center "as soon possible," according to spokesman John Roach. According to Duggan chief of staff Alexis Wiley, Duggan had been considering renaiming Cobo Center before the events in Charlottesville.

The Detroit Regional Convention Facility Authority is currently pursuing naming rights for the convention center in anticipation of a state subsidy ending in 2023. That said, parties involved point out that there are currently no solid plans for naming rights, which they are trying to sell for $500,000 a year, according to Crain's.

In a Free Press column published today, Rochelle Riley called for the convention center to be renamed after boxer Joe Louis. The nearby Joe Louis Arena is set for demolition following the Red Wings' move to the new Little Caesars Arena next month.