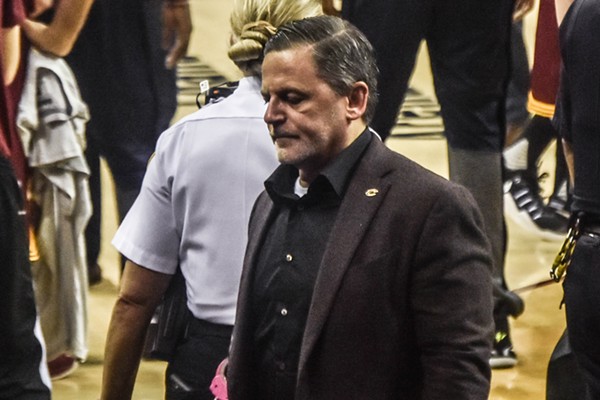 On Monday, Dan Gilbert announced that he shut down the Cleveland Cavaliers' proposal to use public funds to cover around half of $282 million needed to renovate Quicken Loans Arena, which the team built 22 years ago.


The decision comes as the public pushed back over Gilbert's use of tax dollars for the project. Several lawyers representing taxpayers and community groups convinced the Ohio Supreme Court that the use of public money for the project should be a matter that voters — not the Gilbert-friendly Cleveland City Council — should decide, and a referendum was planned for next year.

(Ed. note: The Cleveland deal appears to be back from the dead as of Thursday afternoon.)


Meanwhile, back in Detroit, there’s been a different reaction to Gilbert’s use of public funds for his projects.


Last month, metro Detroiters ooh'ed and ahh'ed at the conceptual drawings for Gilbert’s planned downtown skyscraper on the Hudson site, which will be the city’s tallest structure when it's complete sometime around 2020.


Detroit Free Press staff writer and Dan Gilbert lapdog John Gallagher billed it as an “architectural icon,” and a “stunningly ambitious” and “eye-popping” project. Other slightly less giddy outlets noted that the 52-story building will transform the city’s skyline, and that it would be the most the ambitious downtown high-rise since the Renaissance Center’s 1977 construction.


Of course, Gilbert gets the credit, but taxpayers could end up paying for most of it.


That’s because Michigan’s lawmakers passed a group of laws informally called the “Gilbert Bills” that are specifically designed to provide corporate welfare to Gilbert as he builds the new skyscraper. It’s a slightly complicated package, but it ultimately means taxpayers could end up covering most or all of the 734-foot, $775 million project’s cost. That’s despite the fact that Gilbert is worth an estimated $6.2 billion. (By comparison, the Renaissance Center cost $500 million in the mid-1970s. It was privately funded.)


Also last month, Wayne County announced its intention to give downtown land it owns to Gilbert in exchange for a new jail that he’ll build elsewhere in the city. He plans to use the downtown land for a soccer stadium, though the financing and benefit to city residents aren’t totally clear.


Aside from the hype, Gilbert was also in the news for other reasons at the end of July — Quicken lost another lawsuit. This time a federal judge in West Virginia dinged Quicken with an $11 million fine for providing estimated property values to appraisers that ultimately put buyers underwater, but benefited Quicken.


While the company — now the nation’s third-largest mortgage lender — initially escaped blame for the local mortgage foreclosure crisis, and its formidable PR machine spins a rather flowery picture of itself, an ongoing succession of lawsuits and investigations contradicts their self-assessment.


At this point in 2017, piecing together the lawsuits and investigations that are playing out since 2011 provides a much different picture of Quicken Loans. On one hand there’s Dan Gilbert, Detroit’s superhero. On the other, there’s Dan Gilbert, a supervillain who courts, judges, the Justice Department, and other outlets have accused of systematically preying on Quicken Loans’ poorest customers in the years leading up to the recession.


Which brings us to Quicken Loans’ rap sheet.


As previously mentioned, 2,770 plaintiffs who took part in a class-action lawsuit in 2012 in the Northern District of West Virginia alleged that Quicken Loans officers worked intentionally to broker illegal loans in excess of fair market value — a direct violation of West Virginia's Residential Mortgage Lender, Broker, and Servicer Act. (Quicken denies any wrongdoing and says its practices were industry norms prior to 2009. It plans to appeal.)


That case partly stemmed out of a 2011 West Virginia case in which a judge awarded a homeowner $2.7 million after finding that Quicken committed fraud and violated the West Virginia Consumer Credit and Protection Act. The judge admonished Quicken over its “unconscionable” predatory lending practices, but Gilbert told a reporter at the time that his company was the victim.


Among the most damning of the lawsuits is one filed by the Justice Department in 2015. It alleges that Quicken Loans improperly originated and endorsed Federal Housing Administration loans for unqualified buyers, leading to $500 million in claims against HUD. The suit charges that Quicken “miscalculated income, ignored red flags on loan applications, and created a value-appeals process, which permitted employees to request specific inflated values from appraisers in order to make a loan eligible for FHA insurance.” The complaint includes emails from senior Quicken management in which it admits to lying about mortgage applicants’ income.


Gilbert called the suit a “witch hunt” and filed a countersuit that a judge dismissed in late 2015. In 2017, a federal judge denied a Quicken motion to dismiss the case.


But the charges are similar to those that Metro Times' Ryan Felton explored that were made by Deutsche Bank. In its $1.2 billion lawsuit filed against Quicken Loans, it alleged “fraud in the loan origination process” — although a federal court dismissed its suit on a technicality in November 2015.


That’s all in line with a case in which Quicken Loans settled with the Federal Deposit Insurance Corporation for $6.5 million in 2015 for allegedly selling “soured loans.” Quicken then expressed outrage that the case was made public. On the flipside, industry watchdogs expressed outrage that “reprehensible” companies like Quicken were allowed to settle with the FDIC for so little.


But perhaps most telling are the assessments of those living around Gilbert’s blight. Bernard Parker is a former Wayne County Commissioner who now runs the Timbuktu Academy on Detroit’s east side. He told me last year that the company wrote so many risky loans around his neighborhood that there is “not a positive view of Quicken,” and Gilbert isn’t exactly viewed as a “savior.”


A July 2015 Detroit News investigation provides data that validates their frustration. Of the 378 lenders it examined, the News found that Quicken had recorded the fifth-highest number of mortgages that ended in foreclosure. The report also revealed that, between 2004 and 2006, homes underwritten with Quicken Loans had a foreclosure rate of 34 percent. Around half of those are now blighted.


Also in Detroit, Quicken’s own employees successfully sued the company for not paying overtime wages. In a separate 2016 case, a judge found Quicken guilty of breaking labor law and by trying to discourage union organization.


A 2011 Center for Public Integrity report found Quicken management pushed its employees “to falsify borrowers’ incomes on loan applications and to push overpriced deals on desperate or unwary homeowners.” Employees reported being bullied and pressured into illegal acts. Quicken said at the time that the Center and the article’s author — award winning investigative journalist Michael Hudson — are “not very credible” sources.


Gilbert has vehemently denied Quicken Loans ever wrote or originated subprime or risky mortgages, and says that all its loans were made to well-qualified buyers. Instead, he insists other issues, like high local taxes, are driving Detroit’s blight. Quicken reps previously told me that the company is proud of its lending record and added in a 2016 statement that “characterizing Quicken Loans as being responsible or associated in any way with the ‘foreclosure crisis’ in Detroit, or anywhere else in the country, is irresponsible and reckless.”


Which brings us to Gilbert’s combative nature. No one likes bad press, but he is notably protective of his image, as is evidenced by his aggressive and highly effective PR department. (MLive has described Quicken’s faux-Silicon Valley vibe as “Scientology-esque.”) Gilbert is also known for lashing out at detractors: In 2015, he tweeted that Motor City Muckraker’s Steve Neavling is “dirty scum” and among the “lying venom filled wannabes” who need to be held accountable. Gilbert successfully convinced Yahoo to remove a negative story, and he has a reputation for sending his PR machine after those who are critical of the company.


Infamously, Gilbert publicly trashed the Cleveland Cavaliers' LeBron James and labeled the basketball star a “cowardly traitor” when James announced he was leaving Cleveland for the Miami Heat in 2010.


Outside of the Metro Times’ 2014 investigation into Quicken’s track record, the only serious local look at it was the Detroit News’ 2015 blight investigation. However, it required a follow-up piece after Gilbert tweeted that the original article was “shoddy, lazy journalism.” He then went on WJR and told host Frank Beckmann, "I thought these [News reporters who wrote the article] were professionals. Clearly they're not.”


In a statement to the Metro Times sent after Gilbert’s name-calling, Detroit News managing editor Gary Miles wrote that Gilbert “didn’t so much challenge the facts of our reporting on foreclosures and blight in Detroit as he did attempt to assail the character and reputation of two of the most trusted and decorated journalists in Detroit, and the credibility of the News.”


Meanwhile, local and state officials eagerly work with Gilbert and offer him tax incentives to invest here, and his coverage is largely favorable. In Cleveland, residents are pushing back. In Detroit, there seems to be no such opposition.