Tax foreclosure protesters to Wayne County treasurer: You have the power to stop this 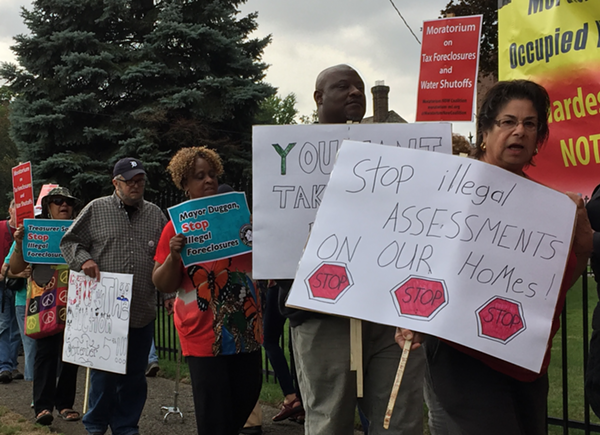 Protesters gathered in front of the Detroit home of Wayne County Treasurer Eric Sabree Thursday demanding he halt next week's tax foreclosure auction in light of a study showing the majority of Detroiters have had their tax bills improperly assessed in recent years, heightening their chance of being foreclosed.

Chanting "Sabree has the power to stop illegal foreclosures," the group of a few dozen protesters got the attention of the treasurer, who at one point came out of his Palmer Park mansion to make the case that his hands are tied by a state law requiring homes with several years of back taxes to be seized and sent to auction. The tax bill issue began in the Detroit assessor's office, which until this week had been operating under state oversight after a 2013 Detroit News investigation revealed the office had over assessed homes by an average of 65 percent.

Study finds Detroit's foreclosure crisis fueled by illegal tax assessments
By Violet Ikonomova
Local News
About 800 owner-occupied homes and 1,100 renter-occupied homes in Detroit will be put up for sale starting Sept. 5, according to the Wayne County Treasurer's Office. And though that's significantly fewer occupied homes than have gone to the tax auction in recent years, the protesters argue the chance that even a single one of those homes had its taxable value overassessed is reason enough to stop the process until the problem of "illegal" tax foreclosures can be solved.

As Sabree addressed media behind the gates of his property, the co-author of a study that has found the tax assessments violate the state constitution stood on the sidewalk explaining her research.

According to visiting Wayne State University law professor Bernadette Atuahene, between 2009 and 2015, the Detroit tax assessor's office assessed 55 to 85 percent of properties in violation of the Michigan constitution, which says that no property can be assessed at more than 50 percent of its market value. And while the assessor's office recently completed a full reappraisal of every Detroit home that helped release it from state oversight, Atuahene says inflated assessments of the city's poorest addresses continue, while some higher-value homes are still being assessed far below their market value.

Which brings us to Sabree's brick mansion on Pontchartrain Boulevard.


"The very problem of unconstitutional assessments is embodied in this very house," Atuahene told the crowd gathered Thursday.

Property records show Sabree is paying taxes on a home whose real market value is listed at $180,000, but Atuahene says an independent assessment shows his home is actually worth about $400,000. (The taxable value of Sabree’s home is only about $70,000. The Detroit News reports he appealed the home’s assessed value in 2011, 2012, and 2013, and has only seen nominal increases since then because the increases are capped by law.)

Lower-value homes, meanwhile — those worth $18,500 or less — are almost always overassessed, according to Atuahene's research. In 2016, she found more than 95 percent of such houses assessed in violation of the Michigan constitution — a mistake made possible, she says, because "once you get it wrong on the lower side, it's a bigger error because the home is worth so little."

While Detroit residents can appeal their property taxes, Atuahene has in the past argued that studies show it's affluent people who are more likely to do so, and who are also more likely to win an appeal than poor and minority populations. In an op-ed for The Detroit News, she pointed out that Detroit Mayor Mike Duggan has himself shared a story about the difficulty of contesting an inflated property assessment. Apparently, Duggan fought for years to help a former girlfriend with an appeal, and the battle went on so long that by the time they won, he had moved on from the woman and married his wife, who did not understand why he was still helping his ex-girlfriend.

The American Civil Liberties Union of Michigan, the NAACP Legal Defense and Education Fund, and a Washington-based law firm have sued the City of Detroit, Wayne County, and Wayne County Treasurer, saying the tax foreclosures are not only illegal, but racially discriminatory in violation of the Fair Housing Act. They say the city of Detroit failed to reduce property assessments after the recession, when home values plummeted. That, plus Detroit's high 2.8 percent property tax rate, activists say, made for a perfect storm that has to date forced tens of thousands of Detroit residents from their homes.

Here is a horrifying map that shows every Detroit tax foreclosure since 2002
By Violet Ikonomova
News Hits
The Wayne County Treasurer has been excused from the suit on a technicality that is on appeal.

Treasurer Sabree told the Detroit News Thursday that keeping the owner-occupied properties from the auction would be “disrespectful to people who pay their taxes.” A spokesman for Sabree, meanwhile, said the treasurer is simply following the law, and it's not his role to try and change it.

Babiarz said there has been no correspondence between the Wayne County Treasurer's Office and the Detroit assessor's office on a possible solution that would prevent people whose tax bills were inflated from avoiding foreclosure.