The city of Detroit says it put two Heidelberg Project-owned properties on the fast track for demolition in error today after Mayor Mike Duggan heard concerns about the properties from residents in the area at a recent community meeting.

Emergency demolition notices were issued this morning for a plot of land piled with toys and other items at 3680 Heidelberg St. and for a lot decorated with clocks, faces, and cars on 3438 Mount Elliott St. The mayor's office tells Metro Times the buildings were destroyed by arson and that open basements remain. Building inspectors deemed the properties an immediate threat to the public because they are "structurally unsound, unsafe, dangerous," and "in imminent danger of collapse."

The orders prompted those affiliated with the Heidelberg Project to convene an emergency meeting Friday afternoon about the fate of the outdoor art installation. Heidelberg Project creator Tyree Guyton has long battled with city leadership over the project, with the most recent feud centering on his efforts to expand it. The Detroit Land Bank has twice rejected the project's request for an additional 40 vacant land parcels — offering no explanation. Those behind the expansion plans are now embarking on a petition effort to get Duggan and the Land Bank to change course, saying they've been taking care of the properties for decades.

Two additional imminent-danger demolition notices were issued Friday for Land Bank-owned properties near the project — one a block south of the Heidelberg Project's main strip on Benson Street, where the "Numbers House" once stood, and the other on Mount Elliott, which used to be the "Party Animal House." Mayor Duggan's chief of staff, Alexis Wiley, says notices should have been issued for only the city-owned properties.

"[Building inspectors did] a visual inspection of the properties and they didn't pull the ownership, which is what they should have done," Wiley says. She adds the city has separately been working with the project's coordinators on a long-term solution for potential safety threats, and that she understands why "they reacted so negatively" when demolition orders seemed to arrive out of nowhere. The notices do "not speak to any greater intention" to dismantle the project, Wiley says.

The Heidelberg Project-owned plots in question have intact basements, charred first floors, and have varying levels of accessibility. The Heidelberg location is roped off with caution tape and barricaded by its own artwork. The Mount Elliott site does sport open basement windows, but is separated from the street by fencing. "The important thing is, this is art," Guyton said when approached by an MT reporter this afternoon.

Of course, Guyton is eager to underscore the distinction between his artworks and the various dangerously dilapidated buildings in the surrounding area. On a trip around the neighborhood, Metro Times found numerous properties that could be deemed "imminent threats," some of which are pictured below. 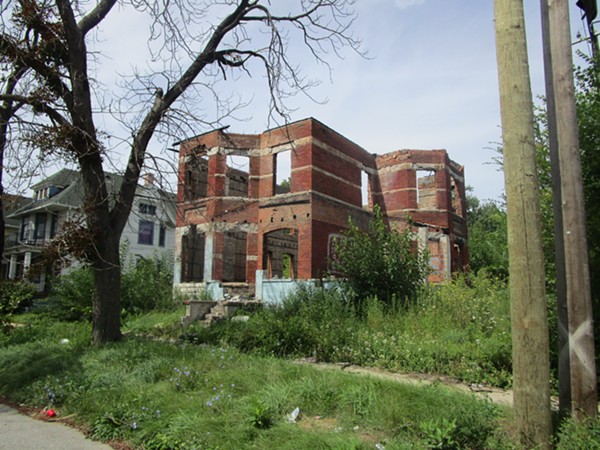 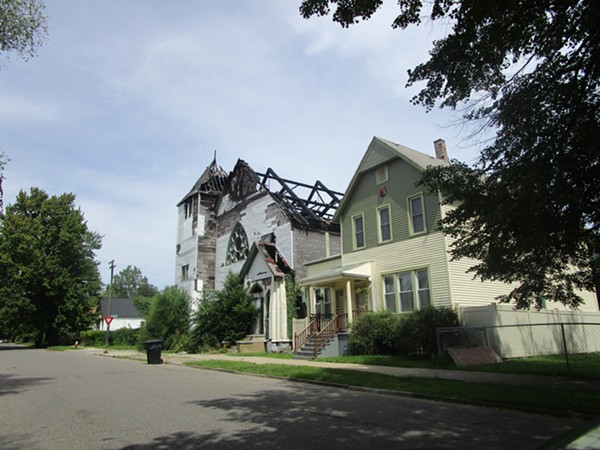 A source familiar with the demolition orders is dubious of the city's claim that they were issued to the Heidelberg Project in error.

"Walking back an imminent danger letter sounds like the properties were not imminently dangerous in the first place," the source says.

It’s worth noting that these properties weren’t swept up with the more than 11,000 structures demolished over the last several years with money from the federal government’s Hardest Hit Fund, as they do not lie within an HHF zone. These sort of targeted, expedited demolitions are relatively uncommon, with only 90 of them occurring in non-HHF zones in the past two years. Emergency demolition orders are often issued in response to resident complaints about crumbling, dangerous buildings. (See our photos above for what could be some more pressing candidates for demolition.)