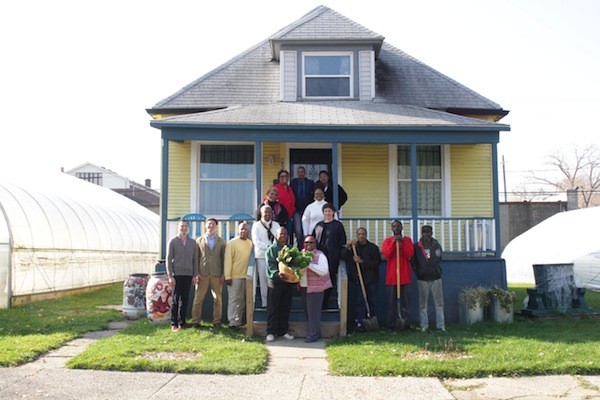 An event at the Oakland Avenue Urban Farm this weekend will unveil plans for a six-acre commons, and celebrate it with music, visual art, and homegrown Detroit culture.

The farm's roots extend back to 2000, when native Detroiter Jerry Hebron and a small community centered around a local church began acquiring lots for planting around the upper reaches of the North End neighborhood. The goals were dictated by the people in the neighborhood, and they included growing food, educating the community, and creating opportunities for economic development.

Over the last three years, however, the farm's organizers have been preparing a "great leap" for the farm: a six-acre civic commons called the Detroit Cultivator, which will produce not just food but cultural activity, as well as a locally rooted economy.

If that all sounds a bit vague and cheery, by all means drop in at the event: Organizers have prepared a room-sized display of what they hope the finished project will look like, something they hope will be a showpiece of equitable urban redevelopment. The plan includes:

• A hostel focused on agricultural tourism, to accommodate some of the more than 5000 visitors it receives each year

• Rehabilitation of the historic original Red’s Jazz Shoe Shine Parlor, including a performance and assembly area in the rear

• A business plan that will turn the space into the first economically sustainable urban farm.

It sounds like a great chance to see a well-organized alternative vision of Detroit, one that builds on what's already present — as opposed to pushing it out of the way in favor of something new.

Crop up takes place 7-10 p.m. at the Oakland Avenue Urban Farm, 9400 Oakland Ave., Detroit; free and open to the public, though RSVP is required.