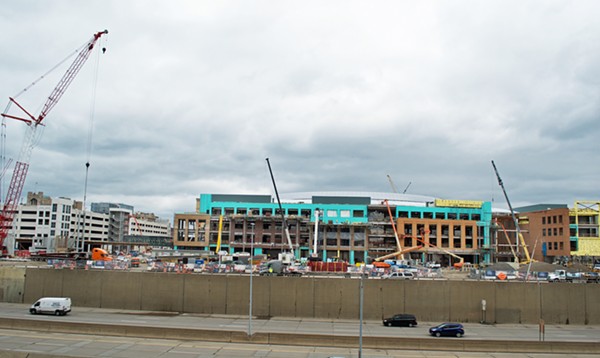 Little Caesars Arena opens today, marking a new era for Detroit's Cass Corridor. But while the late Mike Ilitch and his family get a lot of credit for reviving the south Corridor, it was only a few short years ago that their business practices helped break the area's back.

Starting in the late 1990s, Ilitch developed and executed a 15-year plan that critics call "dereliction by design," in which he quietly bought around 70 properties and left them to rot. That drove down land value and created a redevelopment dead zone that Detroit quickly regenerated around, thus allowing Ilitch to buy up more property for cheap.

But — most importantly — it also helped him convince lawmakers that the Corridor wouldn't redevelop without the public pitching in over $300 million to fund his plan.

While stadium deals promising questionable returns are common, it's rare to find a franchise that deliberately knocks life out of a neighborhood, then asks residents to help pay to revive it.

Yet in 2012, a weakened Detroit government agreed to do just that.

The Ilitches' dereliction plan never got as much attention as it perhaps should have, even though Chris Ilitch admitted to tampering with the Corridor's real estate market in an interview with The Detroit News. "It took us 15 years to accumulate the property so we can achieve this transformative project,” he said. "It's been painful to not be able to develop some of that property because every time we made a move, the price for other property would shoot way up. But we had to wait, and that hurt.”

As painful as it may have been for the Ilitch family, Cass Corridor residents like Richard Etue say they felt more pain. In 2008, he filed blight complaints with the city over Ilitch's blighted properties, and spoke to me about the issues in 2016. "Chris Ilitch admitted to the fact that it was part of their plan to allow [the Cass Corridor] to deteriorate so they wouldn't have a bidding war for the property, which is kind of fucked up, to say the least," he says. "It hurt the people living here and did a lot of damage."
While the Ilitch plan is something fairly unique, developers increasingly view Detroit-level blight as an opportunity to make money coming and going, says Neil deMause, author of Field of Schemes and a blog of the same name that tracks welfare for the wealthy.
"Any smart real estate developer will have an eye for 'How can we use a downturn in the market to grab up as many properties as possible, then when we see an upturn coming, how can we use the government to make as much money as possible?'" deMause says. "It's nice if you can get it to work."

It's hard to say what the neighborhood would look like today if the Ilitch family hadn't tampered with it, though it's safe to assume that it probably would've redeveloped organically, much like the surrounding neighborhoods.
By 2012, the areas around the south Corridor suddenly had a new Starbucks, new lofts, and plans for a new Whole Foods. Several years later, the Free Press reported on the "insane" Midtown real estate market in which the median home sale price jumped by $130,000 in around two years.

Just on the other side of Ilitch's dead zone is downtown Detroit, where the residential rental occupancy rate has steadily has sat around 98 percent for several years. Nearly every once-vacant building in and around downtown is in some stage of redevelopment.
But even as the tide shifted, the south Corridor mysteriously remained a borderline moonscape. Then, in December 2012, Ilitch announced his plan for District Detroit, a project then estimated with a cost of $650 million.

That's when the forces behind the neighborhood's freeze became clear. Though it got lost in the post-announcement pep rally, Ilitch quietly revealed that he had secretly spent 15 years and over $50 million buying up around 70 Cass Corridor properties that he then left to decay. The Detroit Downtown Development Authority colluded, holding onto 39 properties it sold Ilitch for $1 in February 2014.

That means around 100 properties were intentionally neglected.
"I don't know what the neighborhood would look like today, but when you have large property owners sitting on that much land, it makes it difficult for a neighborhood to redevelop," says Detroit City Council Member Raquel Castaneda-Lopez, who says she voted against the arena deal for a variety of reasons.

Despite the rest of greater downtown's upward trajectory, the city and state's politicians rewarded Ilitch for executing his plan with $324 million worth of public assistance for the project.

That figure, however, doesn't represent the true cost to taxpayers. While the Red Wings played at Joe Louis Arena, Ilitch paid the city a cut of the team's ticket, concession, and merchandise sales. That figure topped $10 million in recent years, and would have grown to an estimated $18 million annually by 2020. But the city agreed to eliminate that tax as part of the new deal.

The public's contribution should also take into account the value of the 39 parcels the city sold for $1. By comparison, Ilitch paid nearly $50 million to private landowners within the arena district for just 11 more parcels.

At the end day, the deal wasn't good for Detroit taxpayers, but there's evidence that was by design, too. The city's two lead negotiators in the arena deal quit their posts to work for Ilitch's organization a year after the deal was done.

Cass Corridor resident Richard Etue sits on a Neighborhood Advisory Committee that "advised" the pizza billionaire on how to craft the development in a way that also benefits local residents. He's one of several on the Committee who spoke with me about the neighborhood in 2016.

But Etue says their recommendations aren't legally binding so, predictably, the Ilitches aren't doing a lot of listening. And while their fear is that most residents who suffered through the Ilitch real estate siege will be forced out of the Corridor, efforts led by neighborhood groups and preservationists are at least creating a sincere dialogue about how the rest of District Detroit should look.

Delphia Simmons is a part of the Committee and works at the Coalition On Temporary Shelters, a Peterboro Street non-profit in District Detroit’s boundaries.

When asked “How did this happen?” Simmons, like most others I spoke with, expressed frustration with the government. Everyone agrees that there's nothing technically illegal in Ilitch’s "dereliction by design" plot, so it's hard to fault only them for taking advantage of the situation, she says.

"It's one of those things where they used a model that works," she says.

"It's certainly the way we run urban development in this city," he says. "We allow these kind of things to happen. This is the way the game is played, and that's the big problem that so many of us have — a person like Ilitch can feel like he's doing good things because [city hall] supports this really problematic development."