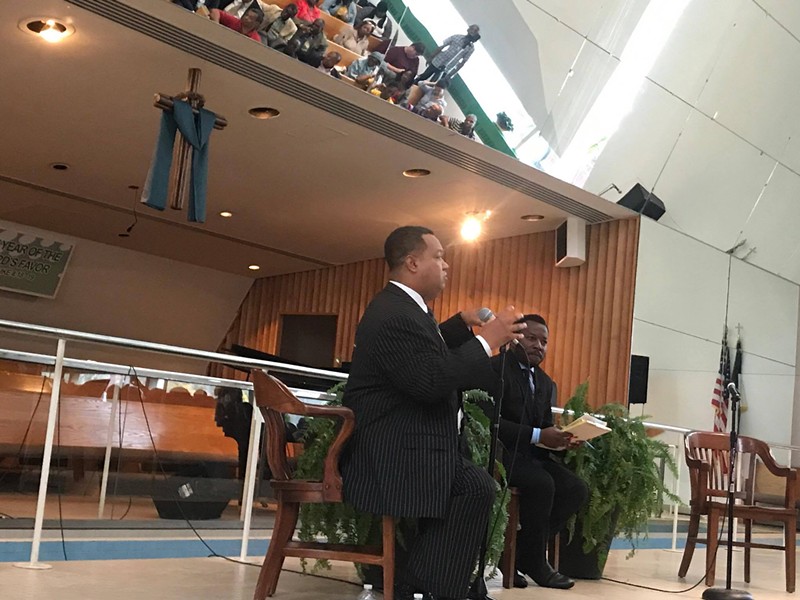 Detroit mayoral hopeful Coleman Young Jr. has presented a vision for how he would address poverty in Detroit, promising to, if elected, sue the state of Michigan to reinstate city-residency requirements for public employment and take steps to keep people facing foreclosure in their homes. Young Jr. presented the plans at a first-of-its-kind Detroit poverty town hall last night, put on by Detroit News columnist and radio show host Bankole Thompson.

More than 600 people attended the event at a church on the city's east side. Notably, one key person was missing: Detroit Mayor Mike Duggan.

"Mayor Duggan, who declined the invitation to participate and address the issue, missed an opportunity," said Thompson. "Cleveland, which has the second-highest poverty rate of any big city, had a poverty forum with the candidates running for mayor. Detroit should not be the exception when it is the very city leading the nation in poverty."
Duggan is in the midst of re-election effort with Young Jr. as his challenger. He also runs a city in which more than 1 in 3 residents live at or below the federal poverty line of $12,060 a year.

Detroit's enormous underclass: The problem that’s taboo
By Jack Lessenberry
Politics & Prejudices
Duggan's campaign did not say why he missed the town hall.

Newly-released Census data show Detroit's poverty rate dropped last year to 35.7 percent, a more than 4 percent decline from 2015. In a media release, Duggan attributed the improvement to efforts by his administration to attract major job providers and train Detroiters for the "growing number of jobs available."

It's not clear how many people have been lifted out of poverty though. The percent change represents about 28,000 Detroiters and comes as millennials continue to move to the city, but the overall population declines. Last year Detroit's population dipped by .5 percent.

Related Report: Despite Detroit's turnaround, opportunity remains out of reach for many

Report: Despite Detroit's turnaround, opportunity remains out of reach for many
By Violet Ikonomova
News Hits
The Duggan administration has taken a multi-pronged approach to help Detroiters "improve their standard of living," last week's release said. The administration says efforts include bringing in large development projects and promoting small businesses through the Motor City Match, which helped nearly 90 entrepreneurs last year. It also pointed to expanded bus service and programs like the Detroit Promise, which offers free four-year and community college to graduates of Detroit high schools.

Large developments include luxury apartment buildings, and the Little Caesars Arena, which failed to meet a local hiring requirement. The Detroit promise program, meanwhile, as of last spring had only a 20 percent graduation rate.

This year, however, Duggan's office launched an effort to get Detroiters job-ready for in-demand fields like health care, IT, skilled trades, and manufacturing through the Detroit at Work initiative. The program provides free training and help with job placement. The city also recently invested $10 million in the Randolph Career Technical Center, which will train a 600 people a year in skilled and construction trades.

Young Jr., meanwhile, has offered up a more ambitious vision for tackling poverty in Detroit that involves changing policies at the state level and recruiting help from the federal government. For example, Young Jr. says he would use federal Hardest Hit Funds to keep people facing foreclosure in their homes rather than spending the money on demolitions, which would likely mean getting the Michigan State Housing Development Authority to change its criteria for use of the funds. He also says he would advocate for reentry programs with the federal government, which is currently run by President Donald Trump.

Detroit is razing houses with money intended to save them
A lifeline demolished
By Steve Neavling
Local News
Young Jr., a sitting state senator, has said he will use his connections in Lansing to help achieve some of his lofty goals. But his promises will likely never be put to the test; polls have shown he lags far behind Duggan ahead of the November election.