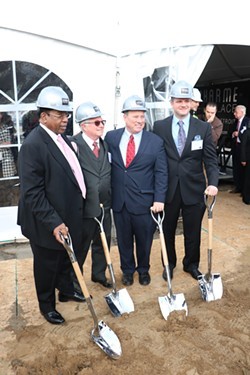 The Detroit City Council has passed a watered-down "affordable" housing ordinance that will require residential developers receiving certain benefits from the city to offer 20 percent of their rental units at just under market rate.

The proposal — which was already seen by affordability advocates as insufficient because it's based on the median income for the region and not Detroit — was further weakened after the Duggan administration suggested a last-minute amendment that would make things easier on developers.

In its original form, the proposal was presented as a way to ensure that people of various income levels can have a place in Detroit's rapidly redeveloping pockets.

"The gentrification that we see in New York, D.C., Chicago, and Boston is not welcome in Detroit," progressive Councilmember Mary Sheffield, who introduced the measure, said before it went up for vote on Sept. 19.

But AMI is a federal statistic that pulls the median from metro Detroit, and as a result, the affordability rules are built on an income median that is more than twice that of a Detroit household. To put it in numbers, HUD lists AMI for a four-person household at nearly $69,000 per year, whereas in Detroit proper, median household income is about $26,000 per year. A unit is deemed "affordable" when a household spends no more than 30 percent of its income on rent and utilities.

And so while the inclusionary zoning portion of the ordinance would not have created much housing for low-income Detroiters in the first place, the Duggan administration — having claimed in the past that developers can't afford to provide units to people at the lower income bands — further reduced the amount of low-income housing it would create.

Through a complicated amendment that passed 5-3 despite Sheffield's objection, the Duggan administration broke things down in such a way that developers who aren't receiving federal or state subsidies to provide the discounted housing will have to make 20 percent of their units affordable only for people living at the 80 percent of AMI threshold.

Meanwhile, the administration suggested people living at lower income bands could be served by the rules guiding state and federal housing subsidies. It proposed that housing provided with help from Community Development Block Grants (CDBG) and the federal HOME Investment Partnerships Program require 15 percent of units to be affordable for households earning up to 60 percent AMI, and 5 percent to be affordable for households earning up to 50 percent AMI. But while these appear to be deeper subsidies that would offset holding developers to a lower standard, in fact, the federal requirements guiding these subsidies already supersede city policy. And Sheffield's office says the originally proposed ordinance made room for the more affordable housing, as it was written in such a way that developers could provide a certain number of discounted units for people living at or below each income threshold.

Further, the city of Detroit has not put CDBG funds into any residential projects in the past three years.

As a result, the amended ordinance — which passed unanimously — changes very little, because the Duggan administration had already been holding most developers to the 20 percent of units for people at 80 percent of AMI standard, and the rules guiding federal housing subsidies already reigned.

The proposal also includes a caveat that lets developers shirk the affordability requirements entirely if they could render a project unviable.

And yet, the mayor's office championed the ordinance after its passage, calling it a "milestone."

"It's going to be a huge statement about the priority of affordable housing and the work we do," Detroit housing director Arthur Jemison, who will soon leave the position to lead the Detroit Economic Growth Corporation, told local media.

But Aaron Handelsman of the Detroit People's Platform called the notion that the inclusionary zoning ordinance will create the affordable housing Detroit needs most "misleading."

"The amendments to the ordinance make it unlikely that new units at 50 and 60 percent AMI will be created unless HOME or CDBG dollars are involved, in which case federal law already requires [those units to be created]," says Handelsman. "And [keep in mind] rents for folks at even 50 percent AMI would still be as high as $700 a month for a one bedroom, which is actually the average rent in Detroit right now."

A representative from Midtown Detroit Inc. was among those who pushed for the amendment that will weaken the inclusionary housing law. The Detroit News reports the nonprofit's real estate director, David Howell, said he believed the original terms of the affordable housing proposal would "not promote or expand [affordable housing]" in Detroit.

A "lower ... income threshold for 10 percent of the units is simply not supportable given the current rents and construction costs for projects in the city today," Midtown Inc. executive director Sue Mosey says in an email to Metro Times.

It's worth noting that none of the affordability rules apply to the slew of development projects receiving tax abatements. According to Sheffield's office, the city law department has said that's not possible due to a 1988 state law regarding rent control.

The inclusionary housing ordinance also creates an Affordable Housing Development and Preservation Fund which is aimed to help address the housing needs of low-income residents living at 50 percent of AMI and below. For now, the fund will be infused with $2 million a year, with the money coming from fines developers will have to pay if they violate the housing rule, and a portion of "net receipts of all commercial property sales during the previous fiscal year."

Affordability advocates who worked with Sheffield's office to craft the proposal had hoped it would be funded with $10 million. At one point, they had suggested adding a surcharge to ticket sales at the Little Caesars Arena to come up with the money.

A separate proposal to warn seniors and low-income renters when affordability rules are set to expire at their buildings also passed the council on Sept. 19. That ordinance, also introduced by Sheffield, will give such renters a year notice. Affordability restrictions have been expiring rapidly throughout the city, particularly in the redeveloping mid- and downtown, where a lot of affordable units are concentrated. Between 2016 and 2020, about 5,000 units receiving the federal Low-Income Housing Tax Credit (LIHTC) program — designed for people living at 60 percent AMI and below — will see the credit expire. That's more than a third of the total number of units in the city that receive the 15-year credit.

Making an affordable housing ordinance more palatable for developers is among the final moves Detroit's office of Housing and Revitalization will make under Arthur Jemison's leadership.

Word came on Sept. 22 that Jemison will be leaving his post to lead the Detroit Economic Growth Corporation. The DEGC is a private nonprofit organization that works with the city on major development deals and staffs the Downtown Development Authority. (You may know the DDA for its tax-capture powers in downtown Detroit, and may remember when its boundaries were expanded to include the Little Caesars Arena in a move that will help the billionaire Ilitch family save $250 million in development costs.)

Mayor Mike Duggan reflected on Jemison's tenure as he headed for the door, calling him "critical to our efforts to make sure the city's revitalization reaches all of our neighborhoods."

"He is an outstanding choice to lead the DEGC as it continues to a larger role in attracting equitable growth and development in Detroit," Duggan said in a statement.

During his time as head of the Housing and Revitalization Department, Jemison oversaw the creation of 1,400 residential units, much of which were unaffordable for average Detroiters. He also presided over the redevelopment of the Fitzgerald neighborhood, a community input-driven revitalization project. In that effort, the city says it "[transformed] publicly owned vacant land and buildings into community assets."

According to the Detroit Free Press, Jemison's predecessor abruptly resigned in March in a move insiders saw as a sign of tension between the DEGC and Duggan's office, which has exercised more control over the organization than previous administrations.