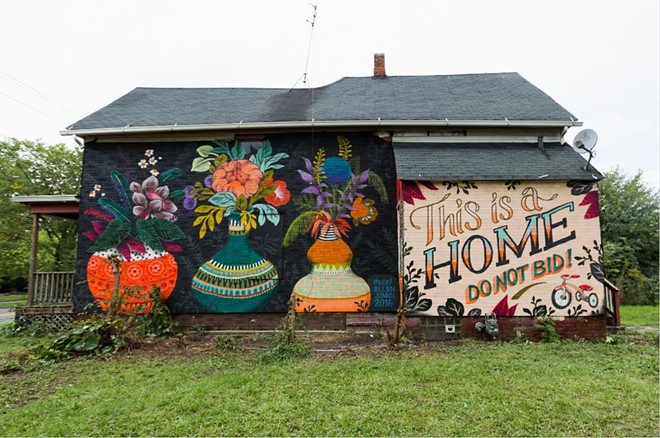 Imagine renting a house with your family, staying there for years, and making the house a home. Now imagine that, one day, even though you've been paying rent all along, a yellow baggy shows up on your property saying the house is in foreclosure – someone (probably your landlord) hadn't been keeping up on the tax bills. Then imagine that you're still in that home as it goes up for auction. You want to buy it, but you have to be the highest bidder.

Two years ago we brought you the story of a Detroit family facing that exact situation. Fortunately, through scrimping and saving, and with help from some generous individuals, the Robertson family was able to buy its rental home from the Wayne County tax foreclosure auction with a $6,100 bid.

This year, there are more than 1,000 such renter-occupied tax foreclosed households on the auction block in Wayne County, with the bulk of them in Detroit. And as some of the families living in those homes try to win them in the auction, a local nonprofit is raising money to make it easier for them to do so.

Related One family fights to win their house back in the Wayne County foreclosure auction after being scammed by a sub-subprime entrepreneur: Out from under

One family fights to win their house back in the Wayne County foreclosure auction after being scammed by a sub-subprime entrepreneur
Out from under
By Allie Gross
Local News
The Tricycle Collective is hoping to provide 40 Detroit families in tax foreclosure with the $500 starting bids they need to buy their homes. This is the fourth year of the fundraising effort, which has donated a total of $54,000 to helping 106 families buy their houses over the past three years.

But Tricycle Collective founder Michele Oberholtzer says it's growing increasingly difficult for people to win their homes in the auction.

"This year, we've already seen about a third of United Community Housing Coalition clients lose their homes in September, which is usually much less competitive than the October auction," she said in an email to Metro Times. "We are anticipating even more of a bloodbath than ever."

According to Oberholtzer, most properties in the auction are bought by mass landlords who see the auction as an "investment" opportunity.

Myth-busting the Detroit tax foreclosure crisis
Detroit is not for sale
By Michele Oberholtzer
Views
If a family does not win its home, the $500 starting bid it was given is recycled to give another family a chance to keep the roof over its head.
The Tricycle Collective needs an additional $5,000 to reach its target of helping 40 families win their homes in the October auction.

You can learn more or make a donation here.

If you want to see what your donation can do, take a look at the video below. It shows the Robertson family matriarch, Shakiya, the moment she learns she has won her home with help from the Tricycle Collective.