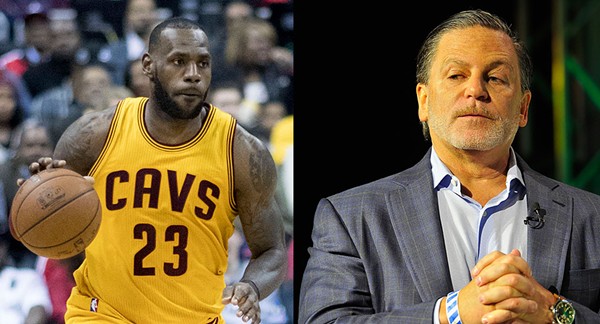 2017 seems to be the year that racists have stopped pretending they aren't racist. What we used to call dog-whistle signaling in more civilized times has given way to people from all walks of life coming out of the closet, so to speak — from President Donald Trump's obtuse attacks on Mexicans and Muslims (among others), to the case of literal Neo-Nazis letting their freak flags fly in Charlottesville, and now in the debate of athletes kneeling in protest of police brutality during the national anthem.

If you find yourself surprised daily at how low we will go, know that you are not alone. Dan Gilbert says he's rattled by the number of "vile, disgusting, racist" voicemails he received after his Cleveland Cavaliers player LeBron James called President Donald Trump a "bum" on Twitter.

Gilbert made the comments on CNBC's "Squawk Box":


"Look, you've got rhetoric on both sides. You know, emotions on both sides of this thing ... To me, it's about allowing people to talk and getting together ... look, some of the issues — forget the methods of protest — but there are some legitimate issues, real legitimate things that have been in America for a long time ... I received voicemails after LeBron tweeted that that were some of the most vile, disgusting, racist ... there's an element of racism that I didn't even know existed in this country. When I got those voicemails, I saved them."


"I didn't even tell LeBron this. Now he's gonna know. The thing is, I mean, some of the most disgusting things I've ever heard people say. And you could hear it in their voice ... the racism. It wasn't even really about the issue, and that's what really got me, because they went to who they really are, some of them."

Gilbert's Quicken Loans donated $750,000 to Trumps's inauguration party. In June, Trump called Gilbert a "great friend" and "huge supporter" during a visit to the White House. Previously, Gilbert has also donated to Trump's GOP rival Chris Christie, as well as $75,000 to a Democratic fundraiser to Hilary Clinton and other candidates.

Our major question is: Who are all of these racists who have Gilbert's phone number?

Watch the video below:

Dan Gilbert: I got racist voicemails after the LeBron James Trump tweet from CNBC.