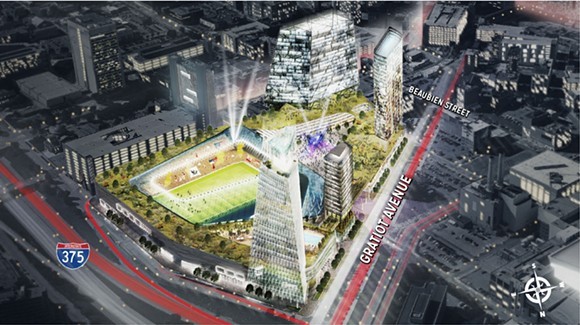 Wayne County officials have cleared another hurdle in a plan that will give billionaire Dan Gilbert the site of a partially built county jail where he wants to build a professional soccer stadium — bringing the public one step closer to likely subsidizing yet another major Detroit development.

Gilbert's Rock Ventures has offered to build the county a $520 million criminal justice complex near midtown in exchange for $380 million and the downtown Detroit site where the "fail jail" sits. But the land at I-75 and E. Warren where the new complex would be built is city-owned and home to a Detroit Department of Transportation facility. Today, officials announced they'd reached a tentative deal under which the city would swap part of that land with the county in exchange for the former American Motors Corp. headquarters on Detroit's west side, which is owned by the Wayne County Land Bank.

Wayne County moving forward with Gilbert's jail swap proposal
By Violet Ikonomova
News Hits
The deal between the city and county was framed by officials as a win-win that will allow Detroit to redevelop the former American Motors site and let Wayne County complete its long-stalled jail project without the risk of cost overruns. And while the deal certainly appears to make sense from that perspective, corporate welfare foes fear it paves the way for yet another taxpayer-subsidized sports facility.

We'll readily admit we're getting a bit ahead of ourselves here. Dan Gilbert and Pistons owner Tom Gores' bid for a Major League Soccer franchise has not yet been approved by the MLS, and 11 other cities are vying for four expansion teams.

But as the second-most populated city in the running — one that already has a minor league soccer team with a huge fan base — Detroit is viewed as a highly viable contender. When Sports Illustrated took an in-depth look at each possible expansion city in December, it found two things standing in the way for Detroit: 1) its turbulent economic history ("there are competing expansion candidates with more favorable growth trends at the moment," SI said), and 2) whether the Gratiot fail jail site could be secured for a stadium.

With the latter hurdle close to cleared, it's time to again examine what an additional stadium will mean for Detroit.

'The fact that [Gilbert and Gores] are going to get something for some type of development is very clear.' tweet this
First, the stadium will saturate an unprecedented roughly 2-square-mile swath of a major city's greater downtown with four professional sports facilities and five professional teams.

But perhaps more importantly, it could mean a windfall for Gilbert and Gores at the public's expense. Gilbert has a somewhat short but already storied history with securing big tax incentives to buy and build in downtown Detroit, where he and his real estate partners have amassed some 90 properties since 2010. Gores recently got more than $34 million to move the Pistons from Auburn Hills to the Little Caesars Arena.

"The fact that [Gilbert and Gores] are going to get something for some type of development is very clear," says Michael LaFaive of the conservative Mackinac Policy Institute. "It's pinpointing the values of the incentives that's very difficult."

It is far too early to tell how much the pair may get to develop the 15-acre complex in which the stadium would sit, but pinpointing that value will be key in determining whether the purported economic benefits of the stadium complex are worth the public cost.

One of the incentives the proposed $1 billion stadium complex would qualify for is the "transformational brownfield" that we examined in this week's cover story, "On top of the game: How Dan Gilbert just scored up to $1 billion in taxpayer money and few noticed."

As the story revealed, executives from Gilbert's family of companies between 2016 and 2017 poured hundreds of thousands of dollars into the campaign coffers of influential Lansing lawmakers who helped ensure something called the transformational brownfield tax incentives were passed. Those brownfields are available for mixed-use developments in Detroit that will cost more than $500 million to build. If a development project is approved, it can then capture some of the income tax revenue it generates and avoid paying sales tax on materials. A total of $1 billion is available for projects that are approved for the tax incentive over the next five years.

Gilbert is expected to seek some of that billion-dollar pot to help pay for his proposed $775 million mixed-use development at the Hudson's site. Rock Ventures has not made clear whether it will also seek the "transformational" designation for the stadium project, but whether or not it does will greatly impact what purported economic benefits the company claims the project will produce.

How Dan Gilbert just scored up to $1 billion in taxpayer money — and few noticed
By Tom Perkins
Local News
In April, Rock released an economic impact study claiming that the mixed-use development to include the soccer facility and construction of the jail complex will produce up to $2.4 billion dollars in economic impact. About $1 billion of that would come from materials and $1.4 billion would come from labor.

Rock says the mixed-use stadium site will create 2,100 permanent jobs that produce about $6.4 million a year in state and local income tax revenue. During construction, the temporary jobs would amount to $52 million in annual income taxes. A transformational brownfield designation would mean some of those taxes could be put back into the project.

Gilbert and Gores could also seek tax increment financing for the stadium complex, as the Ilitches did with the Little Caesars Arena. A TIF allows tax revenue from incremental increases in property value to be captured to finance a project. In the case of the pizzarena, it is this TIF plan that will push public investment in the project to $324 million when all is said and done.

Of course, one could argue that it makes sense for taxpayers to underwrite sports stadiums because they produce significant economic benefits — but numerous studies have shown that is not the case.

A 2008 look at almost 20 years of peer-reviewed studies on the economic impact of stadiums, arenas, and sports franchises found no substantial evidence of increased jobs, incomes, or tax revenues in the communities where they exist. The Brookings Institution has separately found that arguments to support the construction of stadiums — jobs, new spending by people who attend games — are based on bad economic reasoning that leads to overstated benefits.

"There are essentially just two areas of agreement among economists," says LaFaive. "One is that free trade is good, and the other is that subsidies for stadiums are ineffective if not harmful. You rarely find that type of consensus."

Because the planned complex is mixed-use and will include things like restaurants and hotel rooms, some have argued that it will have more of an economic impact than a stadium alone. There does not yet appear to be research on the net effect of public subsidized mixed-use stadium developments. What we do know is that the conservative Mackinac Center tracked projects that received tax incentives similar to the transformational brownfields into which Gilbert and Gores may tap, and found that only 2.3 percent of projects produced the jobs they promised to receive the subsidies.

In the wake of the controversial allotment of public dollars to the pizzarena, the developments surrounding Detroit's next proposed stadium will certainly be worth watching closely.

The MLS is expected to announce two expansion franchises by the end of the year that will begin play by 2020. An additional two cities will be announced some time after that.

The county is also still waiting to hear whether the IRS will let it use bond money that was supposed to be spent to construct the jail at its Gratiot location. The county is seeking to use that money for the new jail complex.