Detroit police say they have two suspects in custody who they believe are behind these abductions.

For the second time in just over a week, a woman riding her bike near the Russell Industrial Center in daylight hours is alleged to have been abducted by two men in a vehicle and taken elsewhere before making it to safety.

The 27-year-old says she was cycling along St. Aubin Street near Clay Street at 5 p.m. Sunday when two men grabbed her, put a bag over her head, and threw her into the back of an SUV. She says they then took her to Highland Park and tied her up in abandoned house. Eventually, the woman says she escaped, dodging between houses until arriving at a nearby gas station for help. 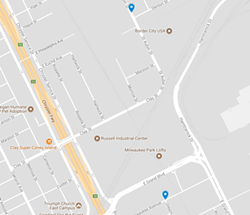 The woman, who asked that her name be withheld, shared details of the harrowing experience on Facebook and provided additional information to Metro Times.

This is the second such alleged incident near the Russell in recent days.

On Saturday Sept. 30, a 24-year-old woman told police she was plucked from Orleans and E. Milwaukee streets, thrown into a van, and robbed and sexually assaulted by two men inside. That was reported to have happened just after 6 p.m., while the sun was still up.

Young woman riding bike in Detroit thrown into van, sexually assaulted by two men
By Violet Ikonomova
News Hits
The woman told police the abusers drove her around and eventually released her at the location where she was first picked up, the Detroit News reports.

The suspects in that case are described as black men in their 30s. Both had shaved heads and one has scars on his body. They were in a white van.

The 27-year-old woman taken yesterday says the SUV her kidnappers were driving was green and gold.

Both of the alleged victims are white. Metro Times on Monday morning saw another white woman biking just yards from where the latest abduction occurred. She said she knew of both incidents and was trying to stay vigilant.

“I was thinking about it when you stopped,” she said. “I’m definitely aware of it but I can't not go to work … I don’t have a car.”

The kidnappings come as post-bankruptcy Detroit enjoys a resurgence that is drawing newcomers to areas beyond the greater downtown, where foot traffic and private and university police forces have helped clamp down on crime.

Crime in the city as a whole, however, has remained high as Detroit's landscape improves. The city last year regained the title of "Most Violent City" in America, according to a recent report from the FBI. Detroit’s police chief has said he disagrees with the data the agency used to make its determination.

Nevertheless, the kidnappings have ignited a debate about whether Detroit is a safe place for women. One longtime resident who works at and lives near the Russell Industrial Center says it’s not.

“I don’t think any woman should be walking alone or riding her bike alone ever, especially within city limits,” said the man, who didn’t want to give his name because he worked for a company that hadn’t given him approval to speak to media. “I mean Detroit is coming a long way, but we still have our bad areas.

“This area is still very dangerous. It’s crazy over here.”

But some women say the idea that women shouldn't cycle or walk alone in Detroit ridiculous and misogynistic.

“There is for some reason this misconception that women are these frail little babies that can't handle themselves and need constant protection here; it's asinine,” said Jessica Cheney Soulliere, founding member of Detroit Women Bike, a group that educates women on bike safety. “It is always the case that one should be aware of their surroundings, and that there is safety in numbers, but not with a 24-7 riding buddy — which can be a hinderance on your freedom.”

Another woman, who emailed us in response to an initial version of this story that did not include additional comment from the female cycling community, said that if women were to follow the suggestion that they should avoid being out by themselves, it could render them more dependent on the men in their lives, and make them more vulnerable to acquaintance rape and domestic violence — common forms of abuse against women.

Soulliere, meanwhile, suggests that cyclists who continue to ride alone stick to well-trafficked routes, keep their cell phones with them, and let someone know where they're heading and which route they'll be taking.

As crime trends in Detroit remain largely unchanged, the city has been growing its bike infrastructure to accommodate cyclists, adding more than 200 miles of lanes that in some cases weave through dangerous neighborhoods.

In May, the Detroit Department of Transportation helped launch the city’s first public bike sharing program. MOGO bike rental stations are largely clustered in Detroit’s mid- and downtowns, but there are stops as far out as the West Village, Southwest, and New Center. One station is located a four-minute bike ride from the Russell.

This post was updated at 5:17 p.m. on Oct. 9 to include additional comments from Detroit's female cycling community. It was originally posted at 11:23 a.m.