October 11, 2017 at 8:53 AM
comment
The Ypsilanti City Council held a rare investigative hearing Tuesday night, during which it questioned under oath four city officials who traveled to China, along with city manager Darwin McClary.

While the hearing didn't provide conclusive evidence of the trip's funding source as council members hoped, it revealed that multiple officials somehow missed multiple important messages and emails about the trip's funding. Mayor Amanda Edmonds also explained why she never told anyone before leaving that the Chinese Consulate was allegedly funding the trip.

Officials also said they have no evidence to support the claim that the Chinese Consulate paid for the trip.

The developer of a $300 million mixed use development proposed for downtown Ypsilanti originally offered the trip. City attorney John Barr said on multiple occasions that it would be "illegal and unethical" for the developer to fund it.
Before leaving for the trip, Edmonds and Ernat led city officials and the public to believe that the Wayne State University Chinese Students and Scholars Association (CSSA) paid for the travel. But a Metro Times investigation found that to be untrue, and that Edmonds knew there was a different funding source before leaving.

A representative of the CSSA issued a statement via a WSU press officer on Sept. 22 that said that the developer gave his group the money to pay for the trip.

Edmonds has since told contradicting stories. In a public statement released on the afternoon of Oct. 6, she said that she knew since Sept. 19 – before the trip – that the Chinese Consulate allegedly funded it. However, she never informed council or the public of that before she left.

So while Edmonds never lied about the funding, she has withheld relevant information on multiple occasions.

At the hearing, council member Pete Murdock questioned why Edmonds didn't tell other officials that the Chinese Consulate paid for the trip prior to leaving. Edmonds replied that she didn't have time to tell anyone. She stated that there was a late meeting on Sept. 19 at which she was "running around crazy." The group left on Sept. 21.

"That meeting went until 1:30 a.m., then we were trying to make up some sleep and go on that trip. There wasn't really a thought one way or the other. There was trying to get through that meeting and get out of town," she told council. "If I had learned that information a week before, probably there would have been time for more discussion."

Council members didn't press Edmonds on why she withheld information in her Oct. 6 statement.

When questioning Edmonds, council member Brian Robb noted that the plane tickets were purchased before the CSSA awarded the "scholarships." Edmonds said that she didn't notice that until after the trip. She also said that she missed a LinkedIn message from a CSSA student that clarified that the developer paid for the trip. She said she was too busy to check her LinkedIn account.

Council first questioned McClary. As was reiterated several times during the interviews, McClary said no city official claiming that the Chinese Consulate in Chicago paid for the trip has any evidence to support that claim. Officials say they took the developer's verbal word. In a statement to Metro Times, the Chinese Consulate denied involvement in the case.

Ernat told council that the CSSA paid for the tickets on Sept. 10 "to the best of my knowledge." But emails released to the city on Oct. 6 contradict her account. Records show that Ernat received an email chain revealing that the tickets were purchased on Sept. 5.

The email chain also shows that the travel agent sent the tickets to the developer, Amy Xue Foster, who then sent them to Ernat. Ernat said she thought the CSSA paid for the tickets, though the email chain provides no indication of that. 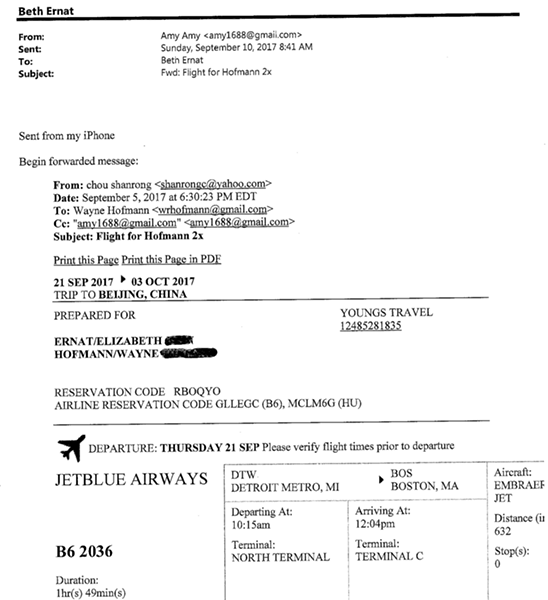 Ernat did not want to answer questions about whether she would have done anything differently in hindsight. She expressed little remorse beyond to say that she should have asked for money from the Local Development Funding Authority, which funds SPARK.

Murdock asked Edmonds, "How do we deal with a developer who misled us on a funding source?"

"That's not a valid question of the facts of the case," Edmonds replied, but later added in response to a Richardson question, "If there was knowing deception then I'm going to have real concerns about working with anyone who deceived us along the way."

City council still does not know who paid for the travel. It will continue the investigation and will hire an independent attorney.