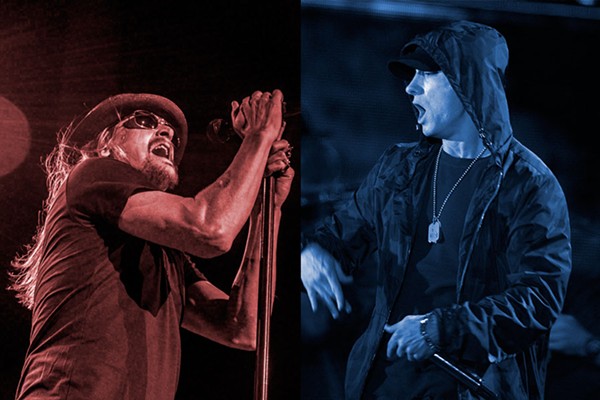 It's no surprise that Macomb County's biggest superstars, Eminem and Kid Rock, have a lot in common. Both are angry white men who love rap. But while there are a lot of things the two could probably find common ground on politically, there's one thing they definitely don't: President Donald Trump.

Eminem blasted the president with a blistering freestyle on BET on Tuesday. Meanwhile, Kid Rock has stumped for Trump.

To explore this dichotomy, Politico writer and Macomb County native Zack Stanton took it upon himself to probe just how one "politically charged" county could spawn two white rap stars with such drastically different viewpoints.

The article does an excellent job of mapping out the county's tendency to flip-flop on presidential candidates, most noticeably when Ronald Reagan ran for office and won with the help of Macomb County, turning the blue-collar county red and giving Macomb voters the name "Reagan Democrats."

The same thing happened in the 2016 election where candidate Donald Trump tapped into the fears and anxieties of Macomb County voters, offering them an America that didn't "threaten" their white, heteronormative way of life.

Growing up in Macomb County and being a resident there during the 2016 election, I can confirm the way people felt Trump was offering something radically different from what Hillary Clinton promised: four more years of President Obama.

Was Obama too progressive for white middle class voters? For some, yes. Not that that was Obama's fault, but anecdotally I know many friends and family members who I believe felt that the world was moving way too fast — and they weren't invited along for the ride.

There are, in a sense, two Macombs. The county is bisected at the waist by M-59 (roughly speaking, 20 Mile Road). To the north are the traditionally Republican areas of the county (“the sticks,” as Kid Rock called it in “Trucker Anthem”), a largely rural area dotted with small towns, which has undergone massive growth under the last two decades thanks to an influx of sprawling upper middle-class subdivisions. The southern half of the county is its traditionally Democratic portion—denser, poorer, working-class, and, by and large, built in the mid-20th century and heavily reliant on manufacturing (“Garbage bag for one of the windows/Spray painted doors with the flames on ’em/Michigan plates and my name’s on ’em,” Eminem raps before name-checking southern Macomb’s largest city on his track “White Trash Party”). But these old-growth suburbs have been rejuvenated in recent years as Detroit has continued to hemorrhage residents; they have become increasingly diverse and home to growing numbers of blacks and Latinos, as well as a robust influx of immigrants from the Middle East.


What ties both halves together is a sense of something once possessed and now lost, though what that something is depends on where you stand. For a certain generation of white suburbanites, it means the loss of the idealized Detroit of their youth—or maybe one they never even knew, but which has been passed down through the oral tradition by their family elders. For others, it means the lost sense of economic security that used to come with being a white suburbanite with a high-school diploma—there’s no longer the assurance that you can work for the same auto manufacturer for decades; you can’t afford a boat or the little place up north like your parents had; and you can’t even assume that the Big Three automakers are financially sound. And, for at least a segment of Macomb, economic anxiety (which is real, despite the snickering of the blue-check commentariat on Twitter) is inextricably tied in with racial animosity.


But is Politco accurate when it says that Macomb County "among the most politically charged places in America?" We suppose it depends on what you consider "charged" to mean. Maybe not politically savvy.