A week of woes for the Detroit Police Department 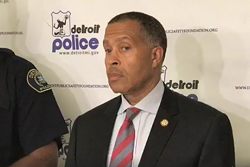 The Detroit Police Department's no good very bad week began Sunday night, with an off-duty officer's brutal night-stick beating of a young black man wrongly suspected of stealing from the Meijer at 8 Mile and Woodward.

The officer, a 39-year veteran of the department, was working in uniform as a security guard at the store when he approached a 23-year-old man as he headed for the exit and asked to see the receipt for the things in his shopping cart.

Silent surveillance video released by the Detroit Police Department shows the two men standing on either side of the cart, the young man fiddling on his cell phone, when suddenly, the officer hops around the cart and starts beating the young man with his baton.

The ensuing tug of war — at this point, the officer is holding the man by his sweatshirt as he continues to beat him — takes the two all the way out to the parking lot, where the beating continues as a small crowd gathers.

A bystander started filming shortly after the wallops began:
A second bystander video taken after the violent altercation suggests the off-duty officer had been trying to arrest the young man for using profanity.

"I tried to get him to shut up," the officer says.

On Monday, Detroit Police Chief James Craig described the use of force as appropriate, proper, and reasonable. He said the officer’s report claimed suspect David Bivins was "very agitated" and made "some profane remarks in a very hostile manner." Craig said the altercation ensued after the officer asked Bivins to turn around so he could handcuff and arrest him for disorderly conduct, but "it didn't work out."

Craig noted that Bivins at one point — as he's being beaten — got a hold of part of the officer's baton and pulled it as the officer held on. The two fell to the ground, briefly wrestling, with Craig describing Bivins as the aggressor.

Police say an internal investigation is underway. The Wayne County Prosecutor's Office says it returned a warrant request to the Detroit Police Department for additional information.

Things got worse for the department Monday night, when two officers are alleged to have violated a chase policy by going after a suspicious vehicle in an east-side neighborhood at speeds of more than 70 miles an hour.

The chase led to the death of 19-year-old Jerry Bradford Jr., who was killed after crashing into a tree.

In an effort to presumably get off the hook, the officers did not disclose that the pursuit involved high speeds. They were suspended Tuesday once Craig learned otherwise. A criminal investigation is underway.

As Craig was providing further details on the avoidable death in a news conference Wednesday, he was interrupted by reporters whose phones lit up with a news alert: A deputy chief who resigned in March had been indicted for accepting bribes.

According to the federal indictment, DPD legal advisor Celia Washington got $3,000 in exchange for helping the unnamed owner of multiple towing companies get more business from the police department. Washington was alleged to have helped the towing mogul keep more than one company in rotation for a particular police precinct or district, against city policy.

Forced to suddenly respond to questions on that case, Craig described Washington's alleged actions as "deeply troubling" and a "significant betrayal" of the department and Detroit residents. Washington, for her part, has denied any wrongdoing.

That about sums up the unfortunate hat-trick notched this week by people who work or have worked for the Detroit Police Department. We should note, however, that it's only lunchtime on Friday. We'll update this post should any additional scandals beset the department by tomorrow night.

We spoke too soon.

About twenty minutes after posting details of the brutal beating, avoidable teen death, and bribery indictment that have beset the Detroit Police Department this week, news surfaced of another allegation against a Detroit police officer. The Wayne County Prosecutor's Office has charged officer Michael Merritt with larceny and misconduct in office for stealing a car jack and other tools from a truck parked behind the third precinct on Sept. 19. He has been suspended without pay.