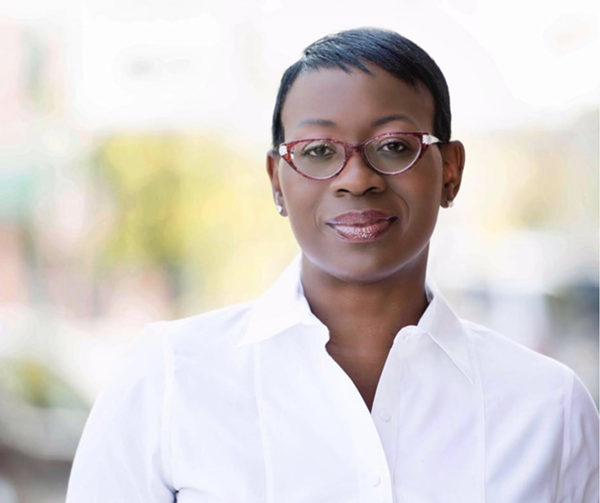 Nina Turner is one of the most energizing, sharpest, and effective figures representing the progressive movement. At a time when Republicans are waging a class war and the Democratic Party still seems intent on ensuring that the needs of Wall Street, the health care lobby, and its corporate donors are a priority, Turner is a loud clear voice on the left who fights for Medicare For All, a $15 per hour minimum wage, and other similar policies.

The Cleveland-born-and-bred former Ohio state senator (2008 to 2014) now heads up Our Revolution, a political action group born out of Sen. Bernie Sanders' campaign that works to elect progressive candidates, push progressive causes, and get people involved in the political process. As Turner puts it, the organization exists "to reclaim Democracy for the  working people. For people who feel like they have been forgotten, and to  take that energy, that synergy and create a political revolution."

She'll partake in several panels at The Women's Convention in Detroit this weekend — including the Medicare For All talk — so we took the opportunity to catch up with her.

Metro Times: Tell me a little about why Medicare for All is the solution to our broken health care system. There are a lot of people who still aren't on board with such an idea.

Nina Turner: Yes, but I think the American people are  really coming around. A lot of polls show that a majority of  Americans across the political spectrum do believe that the government should run a system that helps  us with our medical care.

We are the only  industrialized nation in the world that does not have a Medicare for All type  of program, and that's an idea whose time has come. It is the morally  right thing to do ... as Dr. Martin Luther King said, 'Of all the forms of inequality, injustice in health care is the most shocking and inhumane.'

This our health, and this is not about political affiliation  or who somebody votes for or supports. This is really about our humanity and  our moral commitment to one another, and how as Americans we want  to best invest our money. We’re paying for people who are underinsured  or uninsured right now. We just don’t see it because it’s  indirect.

But to say as a country that we will invest our money to ensure that  everyone has access to hospital services or ambulatory patient services,  prescription drugs ... well, I  believe if we can go to the moon, then we should find a way to have a universal healthcare program in this country. It is vitally important for everybody.

MT: Why do we need a women’s convention in 2017? Why  is this important?

Turner: First, I commend the conveners. This is their convention — their first convention after the  historic Women's March, which was the largest single day march in the history of our country. That  really tapped women — and men who support women — all across the  country.

I think it's very fitting that the theme is "Reclaiming our time." The  headliner is Congresswoman Maxine Waters, and it’s a good time to have women  come together, reaffirm, uplift one another, and talk about the issues that matter  to us. The issues that matter to women also matter to communities ... and these issues have a ripple effect all  across the country.

And the purist sense of the feminist tradition — feminism is not  anti-man. It is pro-humanity. And that is what I'm hoping will come out of the convention. That women get together to reaffirm who we are, what we  are, and why we are, and ultimately this is about humanity.

MT: How have things changed since this last election for women? Is there more urgency to some of these issues that women  face?

Turner: Oh, yes. Absolutely, but there always has been. But we have these moments in history that remind us that we  have a lot of work left undone. You know, women not making dollar for dollar the same as a man is not new. It's been that way since day zero, since the founding of this  country. And when you  put African-American women and Hispanic women into the mix it’s even worse than  that. The latest  revelations about Harvey Weinstein — not new. Women have always had to fight off  predators ... who treat them like they’re just a piece of  meat instead of with the respect that they deserve. That has  been happening since day zero.

But we have these touch points and so now we are  more of aware .... that we have work to do  in the areas of racism, sexism, and I would even say ageism, too. Because I  think that is the new type of discrimination that's around.

MT: How do you advance the ball at the political level? What  are some of the solutions?

Turner: Passing the Equal Rights Amendment would be one great step, and the federal government certainly can implement  policies, and we need state and local officials to do the  same thing.

Also, when the government awards  contracts, we need to make it explicit that they  must pay a living wage, that they can’t pay any less than $15 an hour,  for example. And I want to say depending on what the industry, it should be higher than that. But because it is the tax payer’s dollars,  we can mandate that, we can make that our rules of engagement.

Paid family medical leave is also something that we need. So many working poor in this country will lose their  job if they get sick, or if they have  children and their children get sick. They can’t afford it. That’s inhumane. These are the types of things policy makers can push.

MT: Who are some of the women taking on leadership roles that  you’re excited about and why?

Turner: Well, I’m excited for Stacey Abrams, who is  running for governor in the great state of Georgia. We both served in the legislature at the same time. She excites me because she is taking on the challenge of running  for governor and ... there has never in history been an African-American woman elected governor. That might be hard for people to  believe, but it is true. So, I just really respect the fact that she’s willing  to take this risk for a greater good.

Other women  that I admire, many of them are no longer with us. But when I think about why  I fight so hard, I think about people like Fannie Lou Hamer, like Mother Jones. You know, all of these women didn’t have fancy  titles but they had a commitment that was bigger than themselves ... and they both put things on the line to make this country and their communities better.

And even closer to home — my grandmother, who I talk about all the time. Again,  nobody with a fancy title, but she just really had a pure energy and a pure  commitment that continues to push me to this day. For that, I am just absolutely  obligated to use my strength and my abilities to make this world a better  place. And although she is not here, I would like to think she is proud that I  am doing just that.

MT: Last week the DNC purged some of its more progressive members from  key leadership positions and replaced them with lobbyists for oil companies, Citigroup, Fox News, and so on. What’s your take on that and the DNC's drift? Turner: The purge was short-sighted and it’s going to do more  harm than good. I mean, if they want to talk about unity and bringing people  together, that’s not how you do it — by purging people. All of whom had some  link to either Senator Sanders or Congressman Keith Ellison — so it’s just wrong to  do that. That makes it harder for progressive folks like me to try and pull other progressives into the party.

You  take out somebody like Dr. James Zogby, who has committed his life to this  party? Who has a lot to give, who also represents the Arab-American community,  who worked for reverend Jesse Jackson’s campaigns in the '80s, trailblazing at that time when the establishment Democrats didn’t  even want reverend Jesse Jackson running.

You take out [Barbra Casbar Siperstein], the DNC's first transgender  person, as well, just because she supported Keith Ellison’s candidacy? That is  short-sighted and harmful ... and won't bring unity to the party. MT: We saw leading up to the 2016 election that progressives were dismissed by centrists as "Bernie Bros." That always seemed a  little bit insulting to progressive women, but at this point in 2017 it seems even more inaccurate than it was last year. It seems like there's a more diverse crowd  on the left, but maybe I’m wrong. You’re out there traveling the country, what  do you see when you look at the party’s more progressive wing these days?

Turner: You’re not wrong about that. It's unfortunate that we were maligned so  in 2016 for political expediency. You know, I just got back from a five city  tour in Texas. I went to five cities in three days — 900 miles — to Austin,  Dallas, Houston, San Antonio, and Tyler. You know, bright red Tyler, Texas?  And at each one of these gatherings it was a mosaic of humanity. There are people  of all walks of life gathering to reaffirm that they are on the  right track and that they are doing the right thing. So, if that’s what people  want to call "Bernie Bros," then have at it. Ninety-four-year-old women to 26-year-old  millennials — we span the gambit. So it’s unfortunate that that label was put on  people who were in support of Sen. Sanders ... because nothing can be further from the truth.

What I see are people who care about their families, I see people who care  about their communities. And they just want to know what can they do. Some  people really feel helpless ... in this environment. Unfortunately,  they have to be reminded that they’re not powerless, and that they’re not  helpless. That they have to gather together and be prepared and get out there  to vote, to vote for mayor, to vote for members of the state legislature, to  vote for members of Congress and to vote for the presidency. It’s coming in  2020, but we have to be prepared today.

All of the great social  justice advances that we ever had in this country have come not from people  with big titles and not from people at the top, but just from everyday people  getting together saying “Enough is enough. I’m going to change this, and I’m  going to get involved, and I am going to be engaged." So I hope — as we move  forward — that those labels will go away.