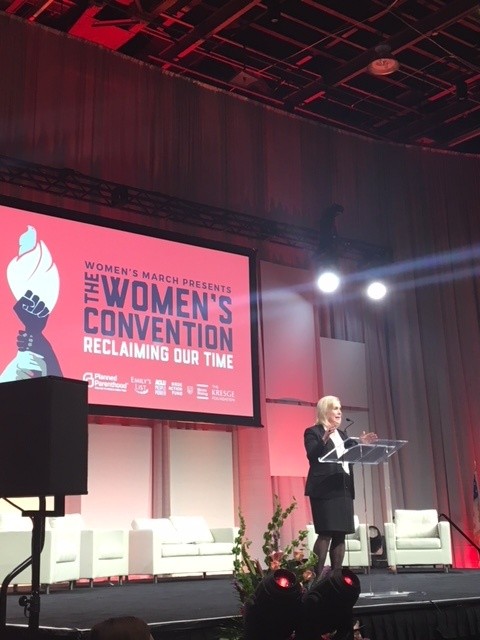 If you missed the memo regarding influx of out-of-towners or sparsely scattered pink “pussyhats” spotted around Detroit lately, it was because Cobo Hall hosted the first annual Women’s Convention this past weekend. The convention was a spin-off from the Jan. 21 Women’s March, where people all over the country marched for equality in the workplace, reproductive rights, healthcare for all, opposition to the Trump administration, and more.

Although organizers say the convention attracted more than 4,000 people (mostly women) to the city, many were displeased with the event’s ticket price —$295 for a weekend pass — feeling that the barrier to entry was too high for most locals. The convention did, however, offer scholarships for those who qualified based on need and wrote a 500 word statement about what they hoped to gain from the convention. Chad Guerrant, the Women’s March Organizing Director of Michigan, says there were more than 1,000 women at the convention on scholarship, and more than 1,200 that were given hotel accommodations.

Guerrant, who says he was raised as a feminist, said he didn’t “feel comfortable talking about why The Women’s Convention chose Detroit.”

“They definitely told us at one point, but I can’t remember,” he said.

One the other hand, Linda Sarsour, assistant treasurer on the Women’s March board of directors, says the organization chose Detroit because it wanted to bring resources to a city that they believe reflects social issues occurring nationwide, including poverty, police brutality, and gentrification.

In addition to addressing social issues, the convention also hosted breakout sessions with businesswomen from across the nation, discussing how to build a successful career or business as a woman. Piera Gelardi, co-founder of the online women’s fashion and culture publication Refinery29, was among these speakers. She said that her purpose as a business owner is “using creativity to drive positive change.”

“Our purpose is for women to feel seen and reclaim power,” she said. “We’re trying to help women reach their potential and be a support system for that.”

According to Linda Sarsour, assistant treasurer of the Women's March board of directors, the goal of the convention was to inspire women to effect social change through voting, engaging their communities and running for office. This included a rousing monologue from actress Rose McGowen — one of many who recently went public accusing Hollywood executive Harvey Weinstein of sexual assault — as well as keynote speeches from Senators Debbie Stabenow, Kirsten Gillibrand, and Amy Klobuchar, and Representatives Brenda Lawrence and Maxine Waters.

One of the more fiery speeches was delivered by Lawrence, who started her career in a post office and rose through the school board to Mayor of Southfield and all the way to state representative.

“We can not allow what happened last November to ever happen again in our history. Never, ever again,” said Lawrence, referencing the election of Donald Trump, who infamously boasted he grabbed women “by the pussy” in a tape that was leaked during the 2016 campaign. “We are still fighting for the rights for freedoms for us to choose what to do with out bodies and make our own healthcare choices,” Lawrence said. “And I’m a firm believer, that if they don’t stop it, I’m gonna have to pass a bill that says they cannot get their viagra until our needs are met.”

“This is an awakening of women,” continued Lawrence, “an awakening that says we will not tolerate sexual harassment.”

Rep. Waters echoed this sentiment during her speech on Saturday stating, “We’re waging our own war against rape and sexual harassment. We’re waging a war against the perverts who believe we can be misused or exploited in the interests of a job, or recognition, or even so-called love.”

Other topics addressed by the senators were healthcare, encouraging women to run for office, equal pay and opposition of the Trump administration.

Activists remain hopeful that can be done, with convention sponsor Emily’s List supporting over 19,000 female candidates running for office. Emily’s List, an organization that works for “larger leadership roles for pro-choice Democratic women in our legislative bodies,” Planned Parenthood, American Civil Liberties Union, National Association for the Repeal of Abortion Laws, and Pro-Choice America were among the major sponsors that funded The Women’s Convention.