Detroit is worst city for veterans, according to study 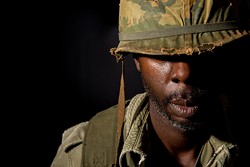 Ahead of Veterans Day this Saturday, personal finance website WalletHub analyzed the best and worst U.S. cities for veterans to live.

Out of the country's 100 most-populated cities, Detroit ranked dead last.

The analysts compared the cities across four dimensions — employment, economy, quality of life, and health. It then evaluated those dimensions across 17 metrics, such as educational opportunities and share of military skill-related jobs.

Where veterans live can contribute to the problem. Although unemployment and homelessness have declined nationally for this group, such issues are simply worse in certain parts of America. In addition, veterans in many cities continue to suffer from long delays in mental-health treatment despite a $10 billion effort to expand veterans’ access to such care.