Steve Bannon's Warren appearance will be met with protests 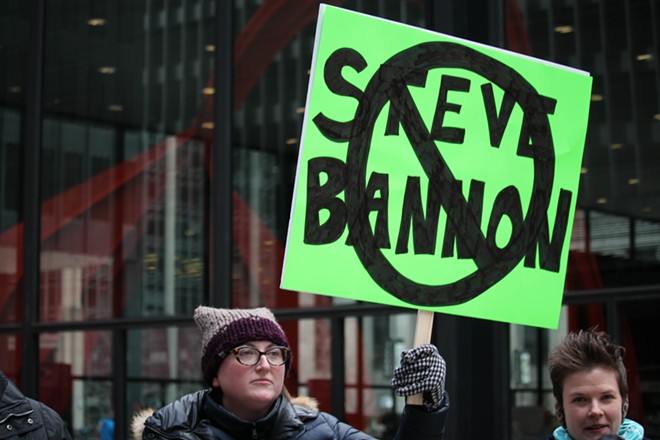 The dinner is scheduled to take place at the Andiamo Celebrity Showroom in Warren, and the Metro-Detroit Political Action Network (MDPAN) will be there to make clear they will "not tolerate any attempt to cater to hate in the state of Michigan."

In a press release sent to Metro Times, MDPAN's media director says Bannon, who served as Trump's chief strategist before being ousted in August, "was the mind behind the administration's most virulently racist policies, [including] the attempted ban of Muslim refugees traveling to the US, and tearing the families apart of people of color through ICE’s mass deportation campaign. The latter hit the Chaldean community of Metro-Detroit especially hard. Additionally, he was reported to be the prominent voice behind Trump’s attempt to enact a ban on transgender people serving in the military."

The group says by booking Bannon, both the Macomb County GOP and the Andiamo restaurant group have endorsed Bannon's controversial views and often inflammatory statements, which include saying women in tech fields suck at interviews, that birth control makes women crazy and unattractive, and that women could combat online harassment by simply logging off.

In response to criticisms over booking the GOP dinner and Bannon, Andiamo owner Joe Vicari released a statement saying his business does not discriminate against potential renters.

"The Macomb GOP has rented our venue for a private event in our Warren Banquet and Event Center and has invited Mr. Bannon as a guest," Vicari said in a statement sent to MT via email. "As a local business, we do not discriminate and have an obligation to fulfill the needs of all guests who choose to host an event at our venue — no matter what their personal or political beliefs might be."

The event and protest are planned to begin at 5 p.m.