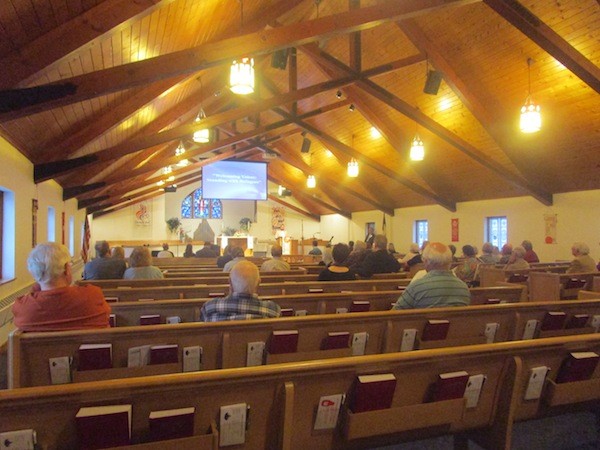 As close newsreaders may recall, the area around Pontiac has been a hotbed of high anxiety when it comes to helping the dazed and displaced victims of the Syrian civil war find their way to safety in the United States. You’d think residents of the same country that charged into the Middle East 15 years ago, ostensibly to oppose violence and hatred, would warmly welcome the victims of Middle Eastern strife here.

Apparently, those rules don’t apply around the seat of Oakland County. Two years ago, county executive L. Brooks Patterson had said, “Any program such as the acceptance of refugees from Syria under current conditions constitutes an immediate threat of imminent danger.”

Patterson had said, "The Middle East, we know what they think of us, they want to kill us. They keep chanting 'death to America,' and this is the educated, this is the people of their parliaments and legislatures.”

Last year, Patterson warned again of “imminent danger” when referring to what he called a “Syrian Refugee Village” proposed for Pontiac. He even played a role in having Islamphobe author James Simpson address the county's monthly business roundtable. No doubt Patterson’s crackpot posture played a role in the way neighboring Waterford Township Board of Trustees voted to deny Syrian refugees entry to their community last October.

But not everybody in the Pontiac area feels the same way. Some people have raised their voices in support of these victims of war seeking a better life for themselves and their families. For instance, on Sunday, an event called Welcoming Voices: Standing with Refugees took place at Waterford’s Christ Lutheran Church. In front of an audience of about four-dozen interested attendees, defenders of these new Americans made their cases.

Some of them were from the organizations that do the heavy lifting of helping immigrants find homes, transportation, and jobs, so they can pay back the costs of their relocation. (Yes, they have to pay back every penny, and they do.) For instance, Mihaela Mitrofan of Samaritas, a Troy-based social ministry of the Evangelical Lutheran Church that has assisted in the relocation of thousands of people from all over the world since the 1950s. Her organization is in a good position to know a thing or two about immigrants, and Mitrofan echoed many of her organization’s points, which you’d think a nation mostly composed of the descendants of immigrants would agree with: “[Refugees] are eager to learn, to work and to become productive contributors to society. As they become settled, they build businesses, create jobs, revitalize neighborhoods, fuel the economy and strengthen the tax base, enriching their communities.” In other words, those myths you might hear about “immigrants taking jobs” or “living off our taxes” are just that.

Dr. Roufaida Al-Minsky of the Syrian American Rescue Network also spoke, but wisely chose to pass the microphone on to her refugee clients. One woman spoke in fluent English, as she’d been an English teacher back in Syria. She described the hardships her family had faced and the humble hopes they harbored for their future. Now the well-educated mother rejoices that her husband has found work as a driver.

Another speaker was Oakland County Treasurer Andy Meisner, who made the point that his grandmother fled for her life from pogroms in Russia, seeking a new life in America. Meisner also had some scarcely concealed criticisms to make of the county executive.

“We had a situation in Oakland County," Meisner said, "where a prominent county official objected in a very public way to me, as a county treasurer, selling tax-foreclosed vacant lots to Syrian-Americans who would build on that vacant lot, a home. And in that home they’d put a family. And that family would be part of the community. Their kids would go to the local schools, and become part of the fabric of who we are.”

As the church setting would suggest, we heard appeals to the Golden Rule and interfaith fellowship that included a warm address from an imam, all designed to bring out the Samaritan in us. We even were reminded of a thing or two we’d forgotten from Sunday School: The Rev. Manisha Dostert of Christ Church Cranbrook called the audience's attention to the Gospel of Matthew, in which Joseph, Mary, and Jesus flee into Egypt from Bethlehem, where King Herod was having children slaughtered. Then when Herod dies, the family, to avoid the misrule of Herod’s son, lives far away from home in Nazareth. As Biblical scholars have pointed out, “Jesus’ earliest years were … spent as a refugee in a foreign land, and then as a displaced person in a village a long way from his family’s original home.” (Come to think of it, weren't Samaritans victims of Biblical-era chauvinism too?)

But the speech that packed the biggest emotional wallop came from Jonah Lane Moore, who grew up in Waterford, and has taught 5th Grade for about two years at the Keys Grace Academy in Madison Heights. The school was created to cater to students of Chaldean, Assyrian and Syriac heritage, but its opening in 2015 roughly coincided with an increasing flood of refugees from war-torn Syria. That’s meant it’s been a place for students to adjust to life in the United States, with help from Moore and others. The school has also provided a lifeline to many families who’d fled the violence, as it’s the academy’s standard policy to provide its students with free uniforms, cold-weather clothes and transportation to and from school.

Moore teaches a class of students from a half-dozen different countries, almost all of the kids are English-language learners, and more than 70 percent of them are recent refugees. Moore got some laughs out of the audience describing the challenges of trying to communicate with students via a little help from his polyglot pupils. Or the unintentional comedy of trying to acclimate his charges to new cultural norms. Despite these challenges, he loves the work, and seeing his students face their new challenges and develop new interests.

But it isn’t all soap bubbles and rainbows. Moore fought to keep his composure while describing what his students tell him they’ve experienced, facing poverty in countries where their parents weren’t permitted to work, living in refugee camps, even seeing a family member die.

In a halting, trembling voice, Moore said, “I have a lot of students that have PTSD. … When I hear what they’ve gone through, I say, 'Oh my god that’s terrible. How can you be here? How can you be at school? How did you make it here?'”

It was enough to make you wish that those afraid of the refugees would get a front-row seat at this event. Who knows? Maybe some refugee-averse residents did show up to hear the other side.

Or perhaps they're content with the inflammatory rhetoric of politicians of L. Brooks Patterson's ilk. Pandering to fear may help certain politicians "mobilize their bases," but it makes the real work of educating native-born Americans about their new neighbors, never an easy task, that much harder. As we all know, the peoples that yesteryear’s 100-percent Americans shunned as troublemaking foreigners are considered utterly uncontroversial as Americans today. The process just takes time.

But it would happen that much faster if politicians showed a fraction of the common sense on display at Christ Lutheran Church this weekend.